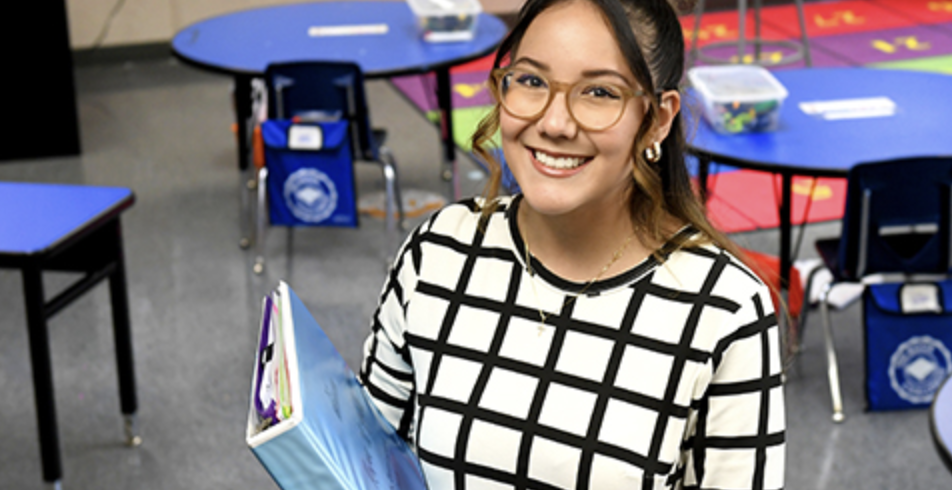 Sandra Dominguez wants to be the teacher she didn’t have.

So, if that means donning a cape and mask, adorned in the colors of her native Colombia, and transforming into “La Valiente Bilingüe” (“The Brave Bilingual”), Dominguez is completely down with that.

“I want my students to be able to see themselves represented in positive ways.

“So when they see ‘La Valiente Bilingüe,’ they think, ‘Oh, wow. Bilingualism is super. Her whole superpower is being bilingual.’ That’s big to them.

“In my classroom, we celebrate being bilingual,” she adds. “I’m always saying, ‘Yay! We’re bilingual!’ We sing and we dance. One of the most important parts of learning is having fun.”

A member of Rowan University’s Class of 2021 who finished up her studies in the College of Education in December, Dominguez was immediately hired to teach in a first-grade bilingual classroom at Mastery Charter-Molina Lower Elementary School. She completed her clinical practice at Molina through the Camden Teacher Pipeline. A partnership between Rowan University, the Camden Education Fund and Relay Graduate School of Education, the program is designed to bring teachers into Camden schools.

She’s a natural in the classroom, says Cara Grayson, who teaches second grade at Molina. A 2017 Rowan elementary education and English alumna, Grayson was Dominguez’s cooperating teacher during her clinical practice.

“In elementary education, you have to be ‘on’ all the time,” says Grayson. “You’re like an actor. You have to be committed to making learning fun. If you don’t, it won’t stick. You always have to be ‘extra.’

“Elementary education is definitely Sandra’s wheelhouse. She doesn’t do anything half way. She’s fearless.”

It wasn’t always that way. A first-generation college student, Dominguez moved to the United States from Colombia when she was five. She spoke no English. In search of better jobs, her mother moved every year until Dominguez was in middle school. That meant a new school each year as she struggled to learn English.

“I felt like I was drowning,” says Dominguez. “My family values education a lot. We had good and bad experiences. My bad experiences pushed me to be a teacher.”

Once, a teacher sat with her for hours because Dominguez didn’t say the word “bird” to her liking.

“I knew how to spell it. I knew what it meant. But I just couldn’t pronounce it the way she wanted me to say it. It took hours. And I thought to myself, ‘This is not OK.’

“As I grew up, I realized no child should feel that part of who they are is embarrassing,” she continues. “When people don’t acknowledge what you bring to the classroom, you kind of feel like you don’t belong.”

Dominguez realized her bilingualism was a blessing when she entered the world of work. She held multiple jobs—a server at iHOP, a nanny, a daycare teacher’s assistant, a camp counselor, a retail employee—to help pay for college.

“Every job I got because I was bilingual,” says Dominguez. “Getting those opportunities helped my confidence. I struggled a lot with that when I was younger.”

Certification in bilingual education and ESL

Her job as a nanny, where she taught the children Spanish, made Dominguez realize teaching was for her. At Rowan, as part of the first cohort of students to pursue certification in bilingual education and ESL, she found a cadre of like-minded students and committed professors.

“My professors were so intentional about how they taught, in the context they taught us, and in the techniques they used. My favorite classes were the bilingual and ESL courses,” says Dominguez, who this spring presented at Rowan’s fourth annual First-Generation Symposium with classmate Arelis Alvarez and professors Beth Wassell and Brooke Hoffman, both of whom teach in the Department of Language, Literacy and Sociocultural Education.

“Sandra is a shining star for our program,” says Hoffman. “She took the learning experiences we provided and just ran with them. She’s wholeheartedly invested in her students as people. She understands the big picture. And, in her education, she has experienced a lot of the factors that often are ignored by teachers.

“We want the students in our program to lead professional development in their schools, to step into leadership roles. We talk a lot about finding your voice as a teacher. Sandra has found it.”

ESL is a critical shortage teaching area, both in New Jersey and across the nation. More than 80 percent of the state’s school districts have English learners and about 23 percent of students in the state speak a language other than English at home, according to Hoffman.

That makes Dominguez even more committed to serving her students. But how does someone who was shy and unsure as a young student transform into a bilingual superhero?

“I became a superhero in December,” laughs Dominguez, who was approached by a fellow Molina teacher, Rachel Baker, to take a role in “The Big Brave Broadcast,” a series of educational videos featuring multicultural characters. The broadcasts air each morning at Molina and at other Mastery charter schools in Camden and Philadelphia.

Rebranding a Wonder Woman t-shirt, Baker hot glued Dominguez’s costume, emblazoning it with a “B” for “Brave Bilingual” and adding a cape and matching mask in yellow, blue and red. They tape their episodes on Sundays. Dominguez even has a theme song. Each episode of “The Big Brave Broadcast” focuses on a vocabulary word presented in both English and Spanish.

Even with prodding from her students, Dominguez never fesses up to her students that she’s “La Valiente Bilingüe.” It’s more fun that way, she says.

“I keep telling them, ‘That’s not me.’ But they say, ‘But she sounds a lot like you. She has your same hair.’

“Sometimes the older students will come up and whisper, ‘I know your secret, Miss Dominguez.’ And I’ll say, ‘What secret? I don’t have secrets,’” she laughs. “I keep my cape and mask in the car for whenever I have to change. I hide it in my bag. But I’m always ready to just grab it and go.

“I feel that it’s a creative way to reach students. And it also benefits students who aren’t bilingual. It helps them understand that being bilingual is a gift.

“It’s fun. I have a great time in the classroom every day. I feel like my hard work is paying off.”