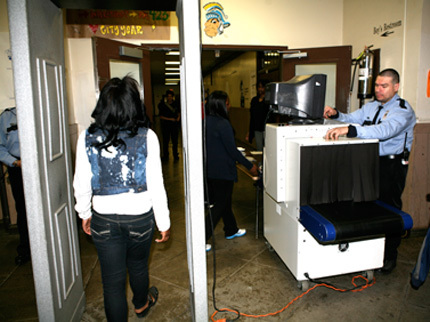 The Notebook
by Dale Mezzacappa
Photography by Harvey Finkel

In the wake of George Floyd’s killing and subsequent law enforcement clashes with protesters, the move for “police-free schools” is gaining support around the country.

And now the Philadelphia Student Union (PSU) is circulating a petition on Change.org asking for the School District to remove all police and school resource officers from schools and replace them with community members trained in de-escalation and other skills that support restorative justice.

PSU is also calling for an end to the District’s legal agreement with the Philadelphia Police Department that details under what circumstances city police can be called into schools.

The petition went up late last week, and by Thursday afternoon, more than 9,300 people had signed it.

It states, in part: “We believe that black lives matter. We believe it’s time this country addressed the role of police in maintaining white supremacy and control in communities.”

The petition is clearly having an effect. Board of Education member Angela McIver, one of two board members who voted last year against making metal detectors mandatory at all District high schools, praised PSU at a Thursday joint committee meeting.

“I want to encourage the board and the School District to authentically engage our students and teachers in the conversation about what schooling could look like without policing,” McIver said. “I am so impressed by the Philadelphia Student Union. … I’m so proud of their burgeoning role as change agents in this city. We should not discount them.”

City Council member Kendra Brooks called for defunding school police at a protest on Wednesday. And the District’s head of security said he is open to having a dialogue with the group.

In several other cities, school districts have been cutting ties with police. The school board in Minneapolis, where Floyd was killed, voted to end its $1 million school resource officer contract. Denver’s school board may vote as early as Thursday on ending the contract that sends 18 city officers to middle and high schools. Four of Denver’s seven board members expressed support in a news conference. In Portland, The Oregonian reported, the superintendent said he was ending a similar program in which 11 armed officers patrolled that city’s high schools. In Pittsburgh,  Tiffany Sizemore, who leads the Juvenile Defender Clinic at Duquesne University, and Jeff Shook, associate professor of social work at the University of Pittsburgh, wrote a public call for the district to divest funding from police.

Continue Reading Article
Back to News