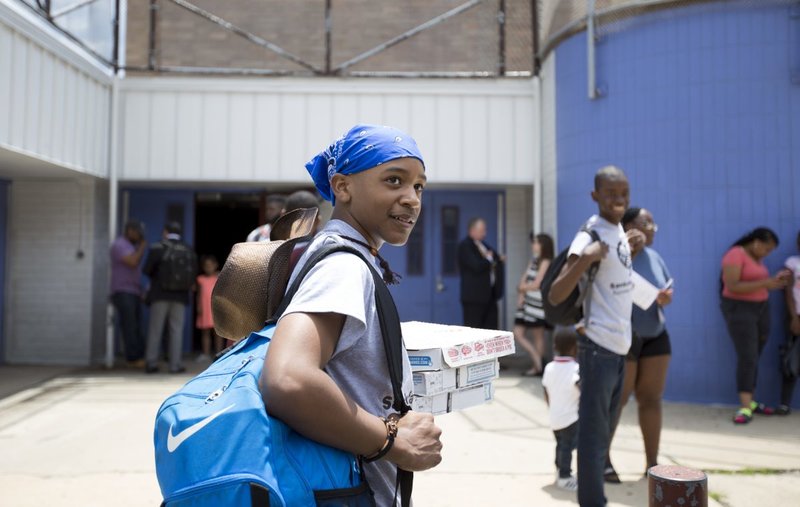 Parents rolled suitcases into the lobby of the Mastery High School building in Camden, teachers checked passports, and a stack of pizzas from Domino’s appeared. Fourteen-year-old Ryan Olan’s parents fussed over him in the moments before the bus arrived to take him to New York’s John F. Kennedy Airport.

“I feel like he’s going to come back a different child,” his mother, Raquel Olan Robinson, said Tuesday. “He won’t have the same perspective as before.”

That evening, Olan and seven other high school students boarded a plane headed for Ghana, where the teens will spend 10 days learning about their heritage as part of a trip planned through Mastery this year. Six students from Mastery were accompanied by two from a Mastery school in Philadelphia, as well as four adults.

The trip was organized by Ani Mwalimu, an African American history teacher at the Camden school, who runs a program aimed at helping students experience international travel and rediscover their roots. On Tuesday, as the students prepared to leave, he said learning about the challenges faced by their ancestors would give them a new sense of place in the world.

“If your ancestors went through what they did, there’s nothing you can’t also overcome,” he said.

Mastery paid one-third of the $3,500 cost for each child’s trip, parents and families paid for another third, and students raised the remaining money by selling candy and water, and through other fundraising efforts that began last fall, school officials said. Mastery also has pledged to fund a repeat of the program next year.

Mastery High principal William Hayes said he hoped the trip will foster a sense of pride in students about their cultural background, and open their eyes to the potential paths their lives could take. The students will visit museums, national parks, and historical sites including a former slave fort.

The trip will be the longest Olan has spent away from his parents. He said that he was excited about the plane ride — his second time leaving the country — and that he was looking forward to learning about the culture in West Africa.

“Hopefully there will be some American food,” he said, “but I’m going to try some new things.”