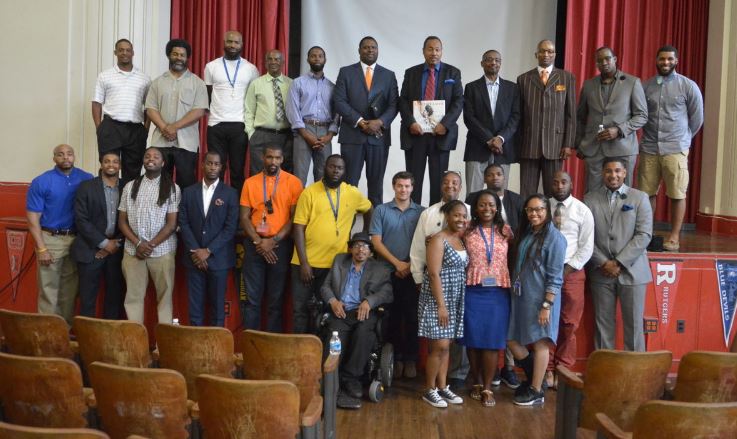 The Philadelphia Tribune
By Chanel Hill

In honor of Father’s Day, Frederick Douglas Mastery Charter School held its 100 Black Men Return celebration on Friday. The celebration was a part of the school’s Men of Frederick Douglass program, a yearlong initiative that brings African-American men to the school throughout the year to mentor and interact with students.

About 40 men volunteers came out to the event, which featured a pep rally, a classroom read aloud, and a session Father’s Day arts and crafts.The event culminated with a Father’s day dinner.

“The Men of Frederick Douglass is something that I work on alongside the co-founders second grade team leader Ashley Carmichael and third-grade team leader Dana Frye-Thompson,” said Jinnely Davidson, assistant principal of culture at Frederick Douglas Mastery Charter School. “There are only 6 percent of our staff who are men of color, so that’s why we thought this initiative was so important. It also gives the students a chance to bond and interact with men of color who are in the community.”

She added, “The 100 Black Men Return is our second big event under our initiative this year. We really just wanted to recognize the positive male figures in our lives and celebrate the fathers and the students. We also recognize that everybody is not a father, but everyone is definitely a figure that our students can use and look up to.”

“I’m assisting with the pep rally, so I just wanted to motivate the individuals as much as I could,” said Tracy A. Jones, president and CEO of T. Alexander Foundation during the event. “What Frederick Douglas Mastery Charter School is doing is really special. This event will give these students an opportunity to see what they can eventually pursue down the line. The men who showed up for this special event are letting the students know that they are here to help them. Hopefully, something that the volunteers say will motivate the students to do better at the next level or during the summer.”

Fifth-grader Sahmiyr Dixon was inspired by the volunteers at the event.

“I really appreciate the volunteers coming in and talking about their life, struggles, and businesses,” Dixon said. “It let’s me know that I can be anything that I want to be if I put my mind to it. I’m just really thankful because it shows me that there are a lot of people in this world who are just like me.”