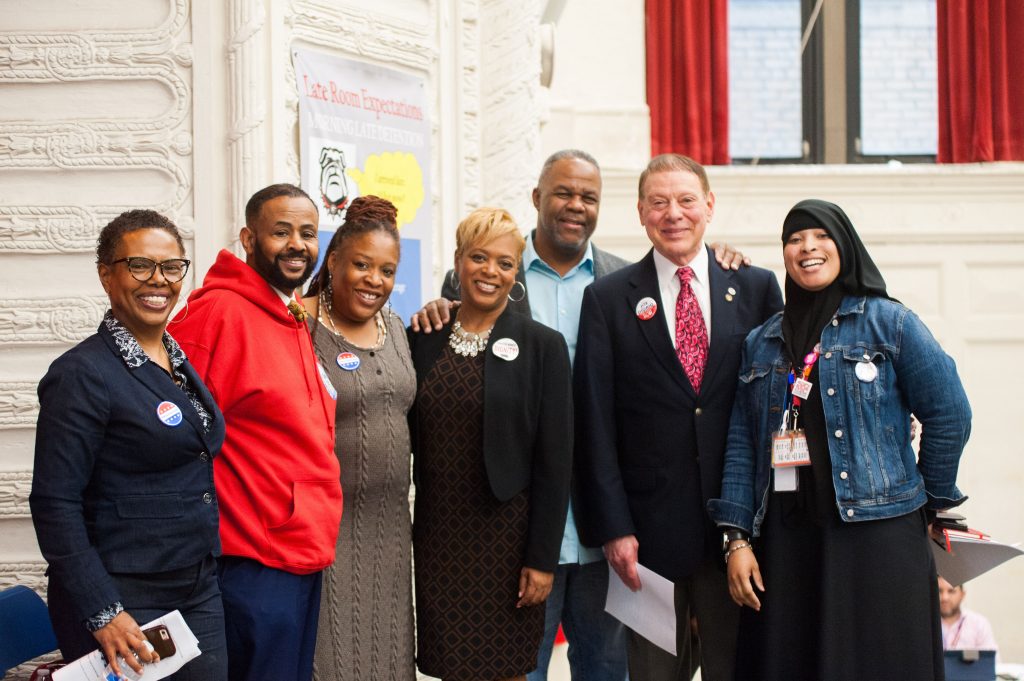 On Thursday, May 9th, the Mastery Charter Schools Parent Action Team held an Accountability Assembly and Candidates Forum at Mastery Simon Gratz High School. The event was an opportunity for Mastery parents, students and staff to hear directly from candidates running for Philadelphia City Council. 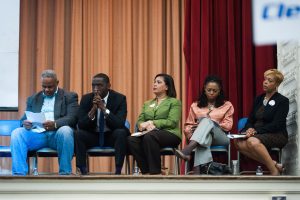 Candidates were asked questions about how they will support Mastery and other high-quality public charter schools and if they will work with the Mastery Parent Action Team to address safety issues in our neighborhoods. In addition, they were asked to commit to having quarterly meetings with Mastery parents. Here are their responses:

Cindy Bass – Incumbent, District 8: “One thing I’m going to do is what I’ve always done; to be a fighter for schools that work. Mastery works and there’s no question about it. This is a formula that works. Know that you have friends in Council that will stand with you and who support public schools of all types.”

Derek Green – Incumbent, At-Large: “Education is a very important issue for me. We need to make sure all children get a great public education. Some of my colleagues in Council have berated me for my support for quality charter schools.”

Curtis Jones Jr. – Incumbent District 4: “Education is opportunity. One of the things no one talks about is the non-traditional scholarships that urban kids can get to go to some of our universities. Temple University is offering free rowing camps this summer to allow young people to understand a non-traditional sport. Me and that man right there (Derek Green) met with Mastery parents when they were getting unfair evaluations for the School District. We stood beside you…I’m going to be there for you.”

Maria Quiñones-Sànchez – Incumbent, District 7: “At Smedley, the Parent Action Team has been incredibly proactive, insisting that not only I come and visit them but that State Rep. Jason Dawkins come.  And when we go and visit Smedley, they have a list. And the list is about traffic and safety. And what I do as a Council member, I work the list…In Council, I have been unapologetic about supporting all public schools…I do not subscribe to the notion that charter schools cost the District money…We have to work with Harrisburg to fix the funding formula.”

Mark Ross – Candidate for Council-At-Large: “What we really need to do is go to Harrisburg and have those people give us equal funding for all public schools. We have public schools that are failing and in deplorable shape. We need to also put pressure on some of these developers to put back into our schools. They look at the percentage of people who don’t graduate and use that to build prisons. We want to prove to these people that Philadelphia schools are not a pipeline to prisons but a pipeline to college. For those who don’t want to go to college or can’t afford to go to college, we need to bring back vocational high schools.”

Isaiah Thomas – Candidate for Council-At-Large: “There are a lot of [high school] seniors here. When you got into the tenth grade, you probably had to do an internship somewhere. During my two and half years at the City Controller’s office, I went to different Mastery sites to make sure my department was a hub for internships. That’s important and if elected I will advocate for every senior to be in a position for an internship. That’s one of the things that works. I will definitely meet quarterly with parents.”

Eryn Santamoor, candidate At-Large, expressed her support for Mastery and high-quality charter schools, but had to leave prior to speaking.  Councilwoman Jannie Blackwell participated in a meet-and-greet following the forum and indicated her support as well. 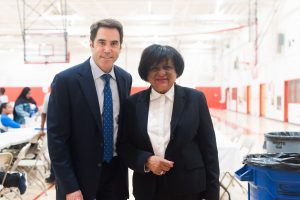 Nancy Gilliam, a Parent Action Team leader, said it was an opportunity for Mastery to come together with one voice and get the candidates’ attention.

“Tonight was about the unity and power of Mastery families and schools from across Philadelphia,” said Gilliam. “We are united in our fight for every child to have a great school and for every student to get to and from school safely every single day. We wanted the candidates to hear us and we wanted to hear what actions they will take if elected.”

Earlier this year, Mastery launched a Mastery Votes campaign to get parents, staff and students registered to vote. They also asked them to pledge to vote in the primary.

Caleb Jones, a senior at Mastery’s Thomas Campus who will attend Penn State next year, shared his excitement about being a first-time voter.

“On May 21st, I will vote for the first time ever! In fact, 82 percent of Mastery students who are eligible to vote are now registered. That’s more than 360 students! That is what democracy looks like,” said Jones.

After the forum, candidates spoke one-on-one with attendees at a meet-and-greet in the gym.

Mastery is a public, nonprofit institution and does not endorse any candidate. The candidate forum was a non-partisan event. 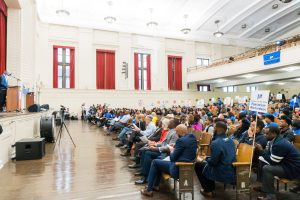 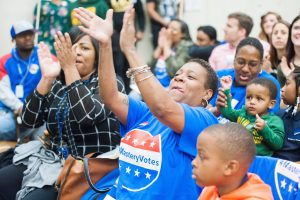 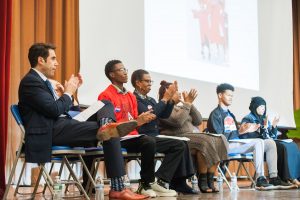 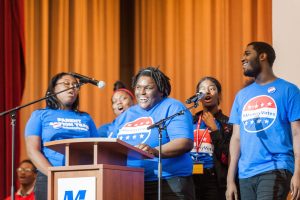 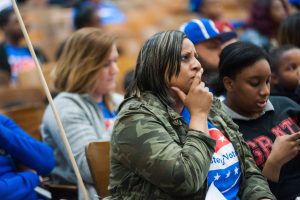