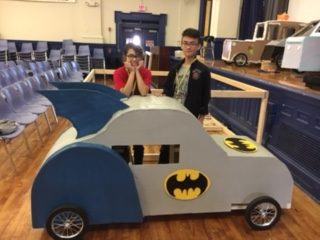 Naomy Flores is getting pumped up about the chance to race her team’s car in the challenge division of the 61st annual Bucks County Soap Box Derby in Middletown.

The eight-car challenge race is new to the derby this year and will be run as an exhibition. It will feature cars built by students at the Thomas Campus of the Mastery Charter School in Philadelphia.

“We had to be creative and work with (each) other,” Naomy, 17, said Wednesday about her team’s efforts. They built a blue and gray derby car modeled after an old Batmobile. “The instructions were complicated. Everything was difficult to do. We have worked really hard.”

The 50 Mastery students in Nicole Thiemann’s two advanced engineering classes built the eight cars as their big projects for the school year. The school worked it out with Bucks County Soap Box Derby organizers to add the eight-car challenge to this year’s event, Thiemann said. Mastery is the only school to have any students participating in the challenge at the Bucks County event.

The eight-student teams worked for about eight weeks to build their cars, using floorboards and other materials provided by the All-American Soap Box Derby as part of its STEM-Based Education Program Curriculum. The charter school’s annual grant fund covered material costs and other expenses for the project, Thiemann said. The students began by assembling the chassis on their respective cars and then built the car’s body, keeping it lightweight while maintaining its structure and support, she said.

The derby is scheduled to begin at 9 a.m. with the eight-car challenge starting around 12 p.m. Saturday along Woodbourne Road in Middletown. Prior to the challenge races, kids ages 7 to 10 will face off in Stock Car division races and 11- to 14-year-old kids will battle it out in the Super Stock Car division races. Also on Saturday special needs racers will team up with professional drivers to race in the Super Kids Cars division.

The races will consist of cars rolling down a hill along Woodbourne Road. Sunday will be the rain date for the competition.

The winners of the Stock Car, Super Stock Car and Super Kids Cars divisions will earn the chance to travel to Akron, Ohio, to compete in the All-American Soap Box Derby in July.

Derby representatives hope the challenge race competition will grow over the next few years by adding school teams from Bucks County. It’s a good STEM project for the students to work on together, McCauley said.

Peter Nguyen, a Mastery junior who worked with Naomy and their teammates to create the Batmobile derby car, said he highly recommends students working on a similar endeavor to give them a feel for what it is like to work on engineering projects.

“We had to deal with a lot of problem-solving issues,” Peter, 18, said Wednesday. “We had to spend plenty of time trying to make sure the front and back axles were square so we can drive the car straight.”

The Bucks County derby group, made up of area volunteers, also is continuing its efforts to move the races off of Woodbourne Road and run them on a proposed track that could be built near the Bucks County Government Services building in Bristol Township. The group has just begun to raise money to help pay for an estimated $25,000 engineering study on the potential project, McCauley said.

To support projects like these, donate to the Mastery Charter Schools Foundation.

Donate
Back to News