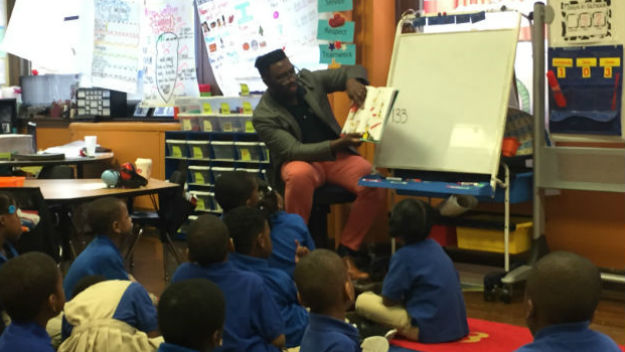 About 100 men volunteered to read to the Mastery Frederick Douglass Elementary School in North Philadelphia as part of a nationwide celebration.

“Yes that’s what I’ll do said young Gerald McGrew. I make a few changes and I ran the zoo.”

Reading Dr. Seuss’ “If I Ran the Zoo,” Taron Jordan volunteered for the Frederick Douglass 100 Men of Color to read to the 550 kindergarten to fifth grade elementary school students celebrating Read Across America Week. It coincides with Dr. Seuss’ birthday week.

“It’s all about being a positive influence on them, you know, just looking at the numbers in our community and things of that nature and just trying to show there is something different out there other than what they might see on the news and what they see in their environment,” Jordan said. “That’s why I do it.”

Many volunteers also talked to the kids about what they do for a living, including Elton Brand, former Philadelphia 76er and now an executive for the team, who said being around the kids was as exciting as playing in a playoff game.