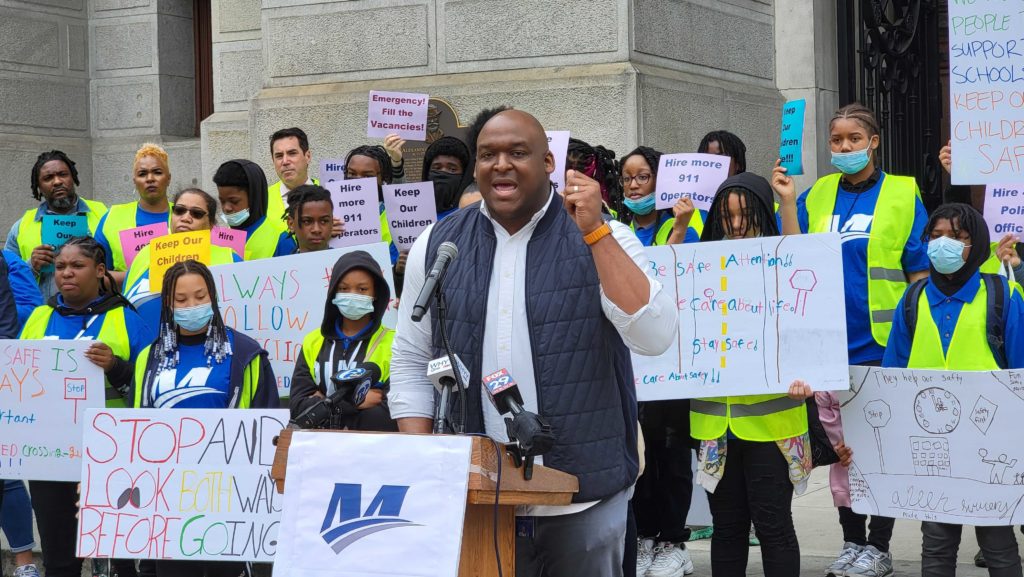 Students, teachers, and parents from Mastery Charter schools on Thursday rallied outside of Philadelphia City Hall, expressing security concerns for children heading to and from the classroom.

The group called on Mayor Jim Kenney’s administration to fill hundreds of vacant positions at the police department and 911 call center, in addition to school crossing guards.

“Citywide, there are 407 corners that are supposed to have crossing guards, but do not,” said Shavan Almodovar. “Thousands of children cross these busy and dangerous intersections every day with no crossing guard. I personally saw two accidents in one week this year. I have also almost gotten hit myself.”

Markida Ross, who helped organize the rally, said their group has identified people willing to fill the vacant positions already funded in the city’s budget.

At a town hall Tuesday, Philly students shared what they want to see in their schools and from the next superintendent, amid a search for the district’s new leader.

“We have proud parents who desire to be crossing guards. We have young men and women who can be inspired to serve their communities as police officers, but we need the city to be accountable to the urgency and the pace of their efforts,” Ross said. “We need solutions on a scale with the problem.”

The call for help follows a string of violent incidents that have occurred around schools before and after classes begin.

Gratz High Principal LeYondo Dunn recalled how, on one day, about 30 students from another school arrived at Gratz as students were being dismissed.

When he called 911 for assistance, no help was immediately available. Dunn said it took a number of 911 calls over fights that had broken out for police to be dispatched.

“They didn’t show up for 20 to 30 minutes. And during that time, I, a lone principal, was in the middle of Hunting Park, ripping students off one another,” Dunn said.

Outside City Hall, City Councilmembers Mark Squilla spoke to the recurring issue of safety across the city.

“Every meeting we go to, people talk about public safety,” Squilla said, calling public safety a “number one issue” that must be a priority on City Council. “It is up to us to be held accountable to make sure that the resources are there so that the administration could hire these vacant spots,” Squilla said.

Starting Monday, the Philadelphia Police Department is boosting its presence outside 25 school zones in response to growing incidents of gun violence.

City Councilmember Derek Green placed the blame on the Kenney administration for not making the hires.

“Ultimately, it is about leadership and execution,” Green said. “We should not be in this situation. This is an issue that we are not just talking about this year.”

Green’s name has been among those mentioned in the city’s inner circles as a possible mayoral candidate next year.

The Kenney administration issued a statement saying it met with school leaders last week to discuss their concerns. The statement went on to say the city is currently hiring crossing guards to work in 12 police districts citywide. As for police and 911 dispatchers, city officials say they’ve continued their recruiting efforts and are working “arduously to increase the number of police officers and 911 dispatchers.”