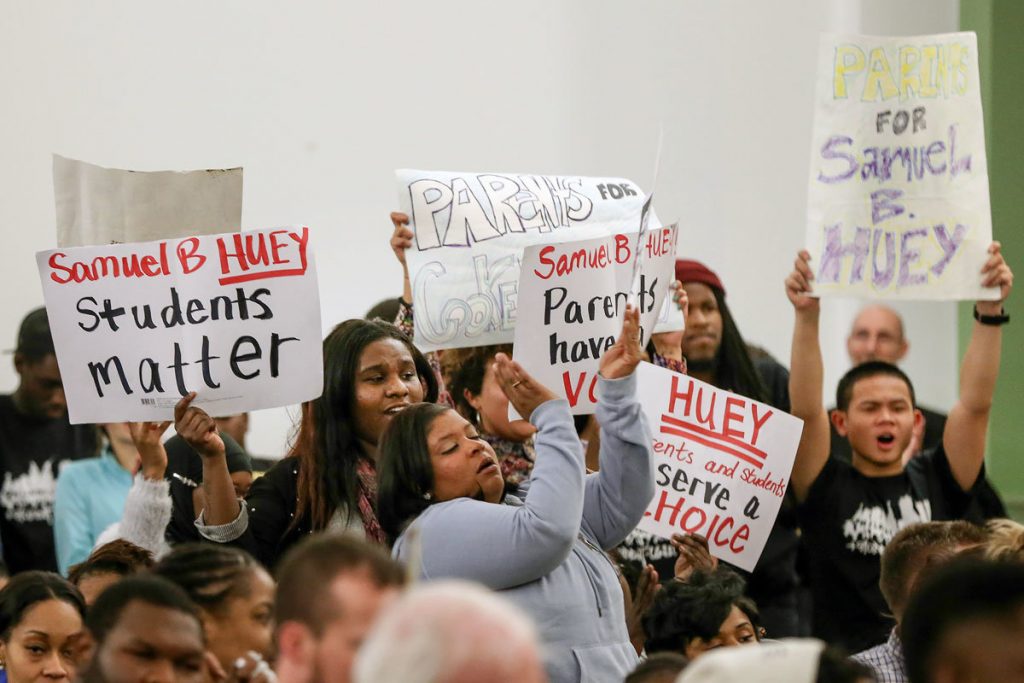 Philly.com-
By Kristen A. Graham

Superintendent William R. Hite Jr. had initially proposed handing over all three schools, among the district’s lowest performers, to charters, but changed his mind on Wister when recent school-performance data indicated some growth at the Germantown school.

But at the eleventh hour – and after impassioned testimony from a number of parents in favor of matching Wister with Mastery Charter Schools – Commissioner Sylvia Simms effectively overruled Hite, putting that option back on the table, and a majority of her fellow commissioners agreed.

In an emotional, last-minute resolution, written as the marathon meeting was ongoing, Simms said that the district had failed parents and that she could not stand by while it continued to do so.

Huey, in West Philadelphia, would be run by Global Leadership Academy Charter School, currently operating in the neighborhood. Cooke, in Logan, would be taken over by the Great Oaks Foundation, which operates charters in other cities.

A second vote, to formally award the three charters, will come in March, district officials said, noting that nothing was final until the charters were formally approved.

The Cooke and Huey tentative takeovers passed, 4-1, with SRC Chair Marjorie Neff voting against both. “I can’t vote [on] a Renaissance school at this time because we’re still in a zero-sum game when it comes to funding,” Neff said.

After the meeting, Hite said he was somewhat surprised – but not shocked – that the SRC bypassed his wishes for Wister.

“There’s a lot of emotion in this whole thing,” Hite said. “Sometimes, that’s what boards do.”

He said he would not characterize the SRC’s action as “crossing” him.

“The SRC just felt the weight of the parents,” he said.

Hite said his recommendation to keep Wister part of the district had nothing to do with Mastery, but was a recognition that charter takeover is a radical step, and an acknowledgment of Wister’s growth.

Some parents from the Huey and Cooke communities raised concerns about Global Leadership’s and Great Oaks’ capacity to transform schools that have long struggled academically.

Leah Clouden told the SRC she was bitterly disappointed by the Huey decision.

“All you had to do was give them the resources necessary instead of discarding them,” Clouden said of Huey students.

The Rev. Pamela Williams, a West Philadelphia activist who had previously opposed charters, did an about-face and spoke out for Global Leadership.

“Samuel B. Huey has been failing for 15 years,” Williams said. “That’s a damn disgrace.”

She called Global Leadership “hope on the horizon.”

Cooke was represented by parents and teachers who also said their school had been deprived of resources and then labeled failing.

“If the SRC was doing its job, they would be reforming our public schools instead of selling them off to the highest bidder,” parent Danyelle Campbell said.

Christine Kolenut, a Cooke teacher, said she had a “laundry list of concerns” about Great Oaks, including its policy of using recent college graduates – largely those without education experience – as full-time tutors in their schools.

“Our kids can’t afford to be experience- or resumé-builders for people pursuing corporate careers,” Kolenut said.

But perhaps the most heated debate centered on Wister.

A group of supporters of Mastery Charter Schools castigated Hite’s move to take Mastery off the table as an option for Wister.

“Hope is down the toilet” without Mastery, said parent Alisha Grant.

When Simms proposed the surprise resolution to put Mastery back on the table, the auditorium erupted.

“My baby has a chance now,” one parent shouted.

“Have you no shame?” another audience member asked loudly.

Those sentiments were emblematic of the push and pull of the evening. At one point, someone else in the audience grew frustrated.

“Why are you all fighting against each other and you all parents?” a voice hollered. “That’s what they want.”