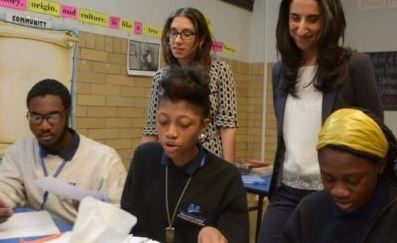 The West Philadelphia school was among 12 schools nationally awarded $9.3 million in grant funding in December to support innovative federal educational programs. Mastery Charter School CEO Scott Gordon said the school, configured for students in 7th to 12th grades, has seen improvements in school climate and student performance since management was turned over to the city’s largest charter school operator in 2006.

Vadehra said the federal government has focused on education policy as a means of helping elevate low-performing schools across the country, identify best practices and replicate successes in other schools.

“It’s incredibly hard work, and we’re seeing pockets of success, not as much as we’d like, and Mastery is one of our leaders,” Vadehra said, exiting the third classroom. “We want to see what’s happening.”

Prior to the handover, the middle school was listed as among the state’s most violent and the building was grossly underutilized with student enrollment less than half of the capacity of 800 students.

Now, the school has consistently finished at the top in school district and state rankings.

“It’s flattering to be recognized as a high performing school,” Gordon said as he waited in the main office for the officials to arrive Thursday morning.

Sharif El-Mekki, principal of Mastery Charter School’s Shoemaker campus, was out of town, participating in the Cities United forum on Black boys in Virginia. But he said in an email that it was an honor to host the federal officials and “share a part of our community with them.”

“Over the past two years, I have been able to also share the perspectives of so many principals from around the country, I am excited that the education department was able to visit and see some of the promising practices that we employ,” El-Mekki said. “Our students are poised to lead and serve in their communities and they begin by making their communities shine today as students and leaders.”

El-Mekki has been providing “feedback, insight and direction” to the U.S. Secretary of Education on federal education policies and their impact on schools since being named principal ambassador fellow in 2013.

Student ambassadors saw the opportunity to host the DOE officials as an honor.

“You always have to be ready and lead by example as a student ambassador,” Ross said. “You want to leave a good impression.”

“I feel very privileged, because I know, of 100 12th graders, I was chosen to be a student ambassador,” Owens said.

Courtney Collins-Shapiro, chief innovation officer for Mastery Charter School and Katie Ziemba, associate principal of instruction, also participated in the school tour, helping to explain classroom instruction taking place. African-American history, literature, music and physics were among the classrooms visited by the DOE delegation. Class sizes were no larger than 20 students in the first three classrooms.

On Thursday, a seventh-grade class made their way through a reading of the classic novel, “To Kill A Mockingbird,” which was one grade reading level higher.

Abigail Henry, who was teaching African-American history, instructed her ninth-grade students to choose the human right most important to Negroes and be prepared to provide three reasons to support their argument.

She wants every student to “feel good about themselves, and that’s my goal at the end of the year: for them to be proud of themselves, provide a sense of identity and know their history.”