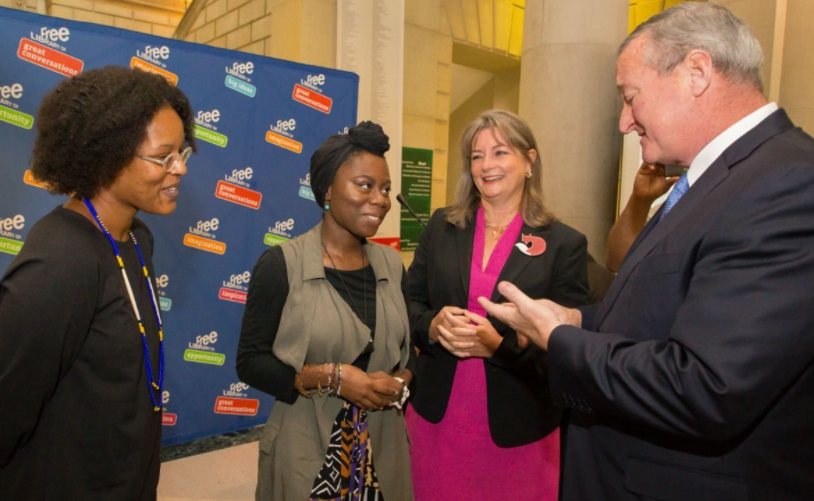 “I’m writing about identity,” says Husnaa Hashim, “about being multiple things at once – a woman, a Muslim, an African American. Authenticity is very important to me: I am all the things I am, all of the time. I’m here in front of you in a really, really raw form.”

If that sounds like a poet talking, it is. If it sounds like a mature, older woman talking, one who has lived a long time and knows herself, her art, and the world, yes, Hashim is that, too – only she’s 17.

Hashim is Philadelphia’s 2017-18 youth poet laureate. “I’m ecstatic,” she says. “I didn’t believe it for a while.” Selected from 21 applicants, she received the award at a ceremony Thursday morning at the Central Library of the Free Library of Philadelphia. The position carries a $1,000 stipend for the year. Current adult Poet Laureate Yolanda Wisher said, “Her poetry is a wondrous mix of ferocity and vulnerability, in which an eloquence of language reflects an eloquence of the soul.”

There’s another piece of news here. Established in 2012, the city’s adult and youth Poet Laureate Program, run for its first six years out of City Hall by the  Department of Arts, Culture, and the Creative Economy, is moving its administrative home to the Free Library. Andrew Nurkin, library deputy director of enrichment and civic engagement and a poet himself, says the move makes sense: “The library is a department of the city, and we see this as a city position with a civic function. It’s a very natural and important move for the program and the library.” The library’s new Center for Public Life will oversee this and all adult library programs for arts, culture, and civic engagement.

A senior at Mastery Charter School, Shoemaker Campus, in West Philadelphia, Hashim is taking college courses in a dual-enrollment program. She said her poetic gift arose from being home-schooled until fourth grade. “I was always surrounded by poetry and language, with lots of storytelling, love of words, and audio books. When I actually started reading, it all really just accelerated.”

First published when she was 10, she got the feeling early that poetry was a world of possibility: “I loved learning about poetry, how there were no rules, and I made so many poetry friends online. I said, ‘Oh, maybe this is something I could be good at.’ ”
Hashim also credits the people she calls “my really amazing mentors,” starting with Nzinga Aziz, her mother; Myra Diaz, “who first taught me poetry in school”; Sharif El-Mekki, principal at Mastery; and her peers and mentors at the Philadelphia Youth Poetry Movement.

The program’s governing committee, Nurkin says, was drawn to Hashim’s “maturity in her poetic voice that really made her stand out. She has been writing a long time, has practiced and honed her craft in ways that really show. She writes expansive poems, concerned with the role of the individual as it relates to society. She has an uncommon depth and insight that drew us to her immediately.”

Her new position will take her and her poetry out into the community. The youth poet laureate does readings at the Free Library and all over the city. She also creates a community-service project. She’ll be mentored until January by the current adult poet laureate, Yolanda Wisher, and in 2018 by Wisher’s successor. Hashim is the city’s fifth youth poet laureate, succeeding Otter Jung-Allen (2016-17), David Jones (2015-16), Soledad Alfaro-Allah (2014-15), and Siduri Beckman (2013-14).

At the award ceremony on Thursday, Hashim read “Mortality Poem.” It bears all the Hashim hallmarks: hypnotic cadence, frank address, political/historical awareness, fierce family love, and the yearnings of the emerging self.

We have become conditioned to turn our backs

the bullet is always a catalyst for the blemish

We wash the fabrics

Hang the prayer rugs to dry on the laundry line

Watch them billow in the wind

We soap our hearts up with baking soda and vinegar

Making sure to rinse them well with distilled water

Before the chadors get buried with the dead people

Were massacred “execution style” in

Multiple bullets sizzled through their bodies

The sharp smell of burnt flesh filled the air

The bullets had no grace in their flight

in an abandoned house

We did not know until five days later

The media did not notice until five days later

it has long been time

To recognize the intersection of anti-blackness and anti-Muslim bigotry

We tend to lean towards Arab supremacy

What is wrong with our hyaline protoplasm?

Is our melanin too prominent?

Is our history too rich?

Were our ancestor’s slave ships

and immigrant ships just worth less?

Are our bodies worthless?

The public is always silent

Have they become desensitized to our skin?

We are taught to

If you only weren’t so dark

If you only pulled your pants up

they would stop shooting us then

i just want them to stop shooting us

I just want justice to arrive

So I try not to fear the gunshots

I try not to fear the public’s silence

Instead I try to hope only for the morning

The morning when the sun will peek through the clouds

showering down blessings of light

and I will spin

soaking up this light until I am drowned in it

Swirling the dried blood of my brothers in the morgue

I will unearth my chador and wash it gently

I will wear the blood stained cloak