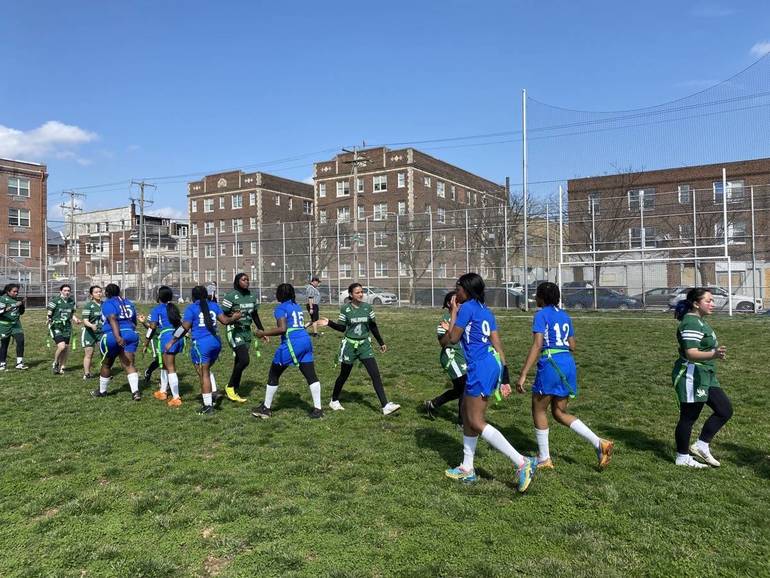 PHILADELPHIA, PA. — Mastery High School of Camden played its first-ever girls flag football game on Saturday, and even though they lost, the Lady Warriors walked away from West Philadelphia knowing they made a piece of South Jersey athletic history.

Mastery High School fielded its first 7-7 girls flag football team, and as it stands they are the first high school in South Jersey to field such a team.

The idea to field a girls flag football team came about when Troy Still, a Dean at Mastery Charter School in Camden approached Aaron Clark to coach.

Clark noticed how schools in Pennsylvania, and North Jersey fielded flag football teams, but there was none in South Jersey.

“Philly has teams and North Jersey has teams, but there wasn’t a 7 on 7 girls football team in South Jersey,” said Clark. “I reached out to  Tim Quinn who is a coach at Landsdale Catholic to try to get us in the league and he came through, and now we have a full schedule and will be playing games.”

Flag Football at Mastery Charter started relatively quickly, and the program was built from the ground up. Learning a new sport has been a learning curve for both Clark and the players.

“We are all new at this, and everything we have has been built from the ground up,” said Clark. “We have been teaching the basics of flag football like running, catching and pulling the flags.”

Coming from a basketball coaching background Clark himself is adjusting to the game and is experiencing a learning curve similar to the players he coaches.

“I have to develop better plays,” said Clark. Even though Clark admits that he needs to get better at play calling the team seemed to overall respond well to the plays he did call.

For their first game the Lady Warriors showed heart and held their ground against Academy at Palumbo.

The growing pains were noticeable for Mastery Charter at times, particularly on offense, but defensively the team shined. Aariana Hood, and Jonnayah Butler both had interceptions in the first half of the game.

“Offensively we have to line up right, run the right routes, and run full speed,” said Clark about his team’s performance. “Defensively I thought we did great.”

Even though Mastery Charter lost 6-0 to the Academy at Palumbo the team knows what they have to work on, and overall Clark is pleased by the Lady Warriors performance.

The Lady Warriors return to action on Friday.