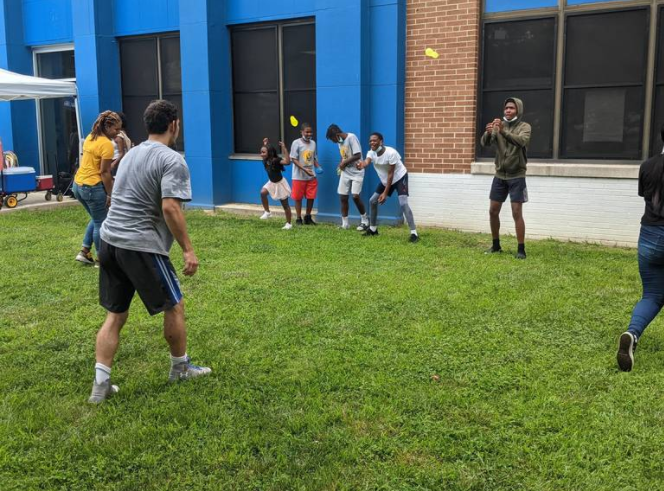 CAMDEN, NJ – This summer the Mastery High School of Camden offered six weeks of summer retreat programming, and on Wednesday campers celebrated the midway point of the program with a barbecue featuring attractions like kayaking, a video game truck and a DJ.

Carmen Ubarry, the school’s family and community engagement director who’s in charge of the camp, said the free programming which serves about 150 kids is centered on school clubs.

“After two years of not having clubs, we have students that have graduated out and we have a whole group of students that aren’t even familiar with (them),” she said. “We wanted to grant them opportunities to come to the school a little earlier (and) find a club to sign up for.”

Ubarry said there’s a wide array of activities available, from a fashion club to a drumline camp to a soccer clinic.

“The summer program has been amazing,” said Troy Still, Mastery’s dean of culture and another leader at the camp. He said that the LEGO robotics program and a girls’ empowerment club were also popular, but that most kids in the program are doing the Camden Monarchs’ intensive basketball clinic.

That’s what brought Zane Ragland, 13, and his brother Roman, 11, to the camp.

“I’d rather be here than be at home,” Zane said.

If he wasn’t enrolled in the program, he said “there’s a big chance I’d be playing basketball, but not at the level I’m playing here.”

Roman has come to like the program as well.

“It’s going great,” he said. “I didn’t really like it at the beginning, but now it’s better.”

The siblings get to play together, which Still said is a benefit of the program being open to kids as young 5th-graders and as old as rising high school seniors.

“Siblings got to stay together,” he said.

Ubarry said Mastery’s summer programming will end on August 11 and that the transition toward getting kids ready for school will happen the very next day.

“On August 12, we’ll have a big back-to-school bash,” she said, which will essentially be an expanded version of Wednesday’s event. “The bash will be focused on eliminating any barriers students may have to coming to school.”

She said back-to-school necessities like haircuts, uniforms, backpacks and more will be available at the event.

There will also be a clinic offering the vaccine to the high schoolers, the vast majority of whom would be old enough to receive a dose of Pfizer. Ubarry said there will be incentives for students to get vaccinated at the event.

In reflecting on the midway point of his summer, Roman

“It feels like it went too fast,” he said.

But it’s not clear if the boys will to return to school in person this year. Zane, who will be a freshman in the fall, wasn’t sure if he would put his Monarchs skills to use by trying out for the school basketball team as his parents are still considering homeschooling him due to fears about COVID-19.