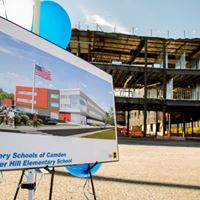 The new Mastery school under construction in Camden’s Cramer Hill section will be complete by the start of the next school year, Mastery officials said Tuesday, marking the progress with a beam-raising ceremony on the site.

When completed, the school at East State Street and River Avenue will have the capacity for 750 students in kindergarten through eighth grade. The facility will include 43 classrooms, gymnasium, library, cafeteria and more, said Mastery spokesman Jeff Jubelirer.

Hybrids of public and charter schools, Renaissance schools are publicly funded but privately operated. Unlike charter schools, they guarantee seats to every child in the school’s neighborhood, and they have contracts with the district mandating services like special education. By law, they must operate in new or renovated buildings.

“Camden students deserve to attend school in safe and modern learning environments that support learning, and Mastery’s building is a critical next step in a process that is building momentum,” Paymon Rouhanifard, superintendent of the state-run district, said in a statement.