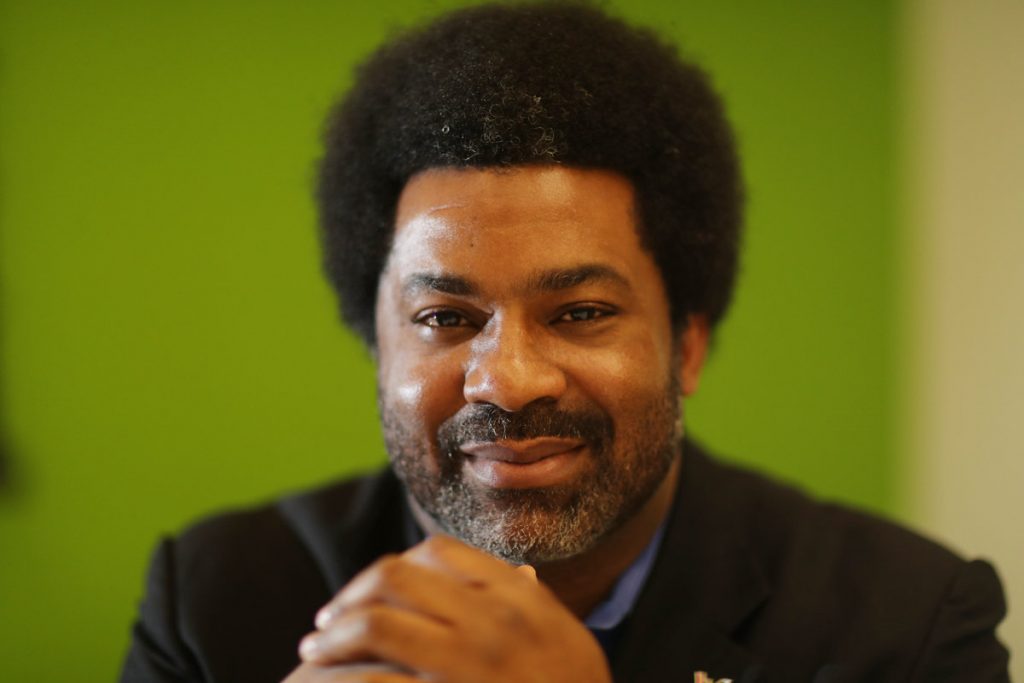 He Seeks More Black Men to Teach in Philly and Beyond

Philly.com-
By Kristen A. Graham

Sharif El-Mekki vividly recalls every black male teacher who ever taught him: two in elementary school, two in high school.

“They were transformative figures in my life,” said El-Mekki, a veteran Philadelphia educator.

For 2017, El-Mekki has a goal to organize 1,000 black men to show up for the first day of school, encouraging city youths to be their best.

By 2025, his goal is much loftier: to nearly triple the number of black men teaching in the city. To that end, he has launched the Fellowship: Black Male Educators for Social Justice.

Nationally, just 2 percent of the teaching force is made up of black men. In Philadelphia, the number is better, but still low – last year, fewer than 400, or about 5 percent, of School District teachers were black men.

The Fellowship has three aims: to hold periodic convenings of black male educators, to influence education policy, and to expand the pipeline of black male teachers.

Why does it matter?

“We have strong evidence that students of color benefit from having teachers who are positive role models, as well as from the changes in classroom dynamics that result,” U.S. Education Secretary John B. King Jr. wrote for the same report.

“But it’s also important for our white students to see teachers of color in leadership roles in their classrooms and communities. Breaking down negative stereotypes helps all students learn to live and work in a multiracial society.”

The 17 black men who formed the Fellowship did so as an outgrowth of a monthly meetup at the 48th Street Grille in West Philadelphia. None attended colleges of education for their undergraduate degrees. Each was a career changer.

“We just see all these holes in the pathway to divert people,” said El-Mekki, principal of Mastery Charter School-Shoemaker. “If we have a high percentage of black boys dropping out of our comprehensive high schools, that’s a leak. If we have folks not prepared for college, that’s a leak. Our black boys aren’t being told, ‘You’re a great leader, why don’t you lead in a classroom?’ ”

El-Mekki’s mother is a teacher, and he wanted a career focused on social justice. At first, he thought that meant he had to be an lawyer.

“I didn’t see education as the lever,” El-Mekki said. “I didn’t see that it was ground zero for social justice.”

Changed by a shooting

El-Mekki grew up in the city’s Wynnefield section, and shortly after graduating from Indiana University of Pennsylvania with a degree in criminal justice in 1992, he was shot during a pickup football game on a Bartram High field in Southwest Philadelphia.

That moved him to work with young people who, like his shooter, had trouble with anger management and lacked opportunities – “people who were oppressed and who were then oppressing others.”

He began working as a counselor at the Youth Study Center. Then, someone approached El-Mekki about an alternate-route teacher-certification program and suggested he would be a good candidate.

El-Mekki’s work has drawn attention from President Obama and Oprah Winfrey. In 2014, he was chosen by then-U.S. Secretary of Education Arne Duncan to be part of the first group of Principal Ambassador Fellows, a select group of exemplars nationwide.

Black male teachers in Philadelphia would reach out to him periodically, asking to talk about the often lonely spot in which they found themselves. El-Mekki didn’t go out looking for peers – they all gravitated toward one another.

The dinners at 48th Street Grille began – talks about how to get beyond being pigeonholed as disciplinarians, about what it’s like to be constantly called upon to be experts on black culture or diversity, about how to bring their experiences to the table without being viewed as “hardheaded and uncoachable,” as El-Mekki said. Eventually, the group formalized its work into the fellowship, now a nonprofit with 50 paid members.

It has convened five times and held a hiring fair, drawing participants from around the country. Members have had talks with Duncan and King about how to better support black men and male educators of color. And they hope to place chapters of their group in 10 high schools in the city.

‘Someone to relate to’

An early student ambassador, Tamir Harper, 16, a junior at Science Leadership Academy in Center City, didn’t have a black male teacher until he got to SLA.

Having that English teacher was a revelation, he said.

“I had someone to relate to, and I didn’t feel like the elephant in the room,” Harper said. “It was a relief. I finally didn’t have to be the black spokesperson.”

Harper had been set on a career as a doctor. Now, he wants to be a teacher.

Will Hayes, a Fellowship member who works in South Jersey as principal of Mastery-East Camden Middle School, said the work of bolstering the ranks of black male educators is enormously important.

Hayes makes sure that students, particularly black males, have an opportunity to see what his job looks like up close. It’s about “changing the narrative,” he said.

“There’s a pervasive narrative about teaching and all that’s wrong with it,” Hayes said. “People won’t overcome that without one-on-one conversations.”