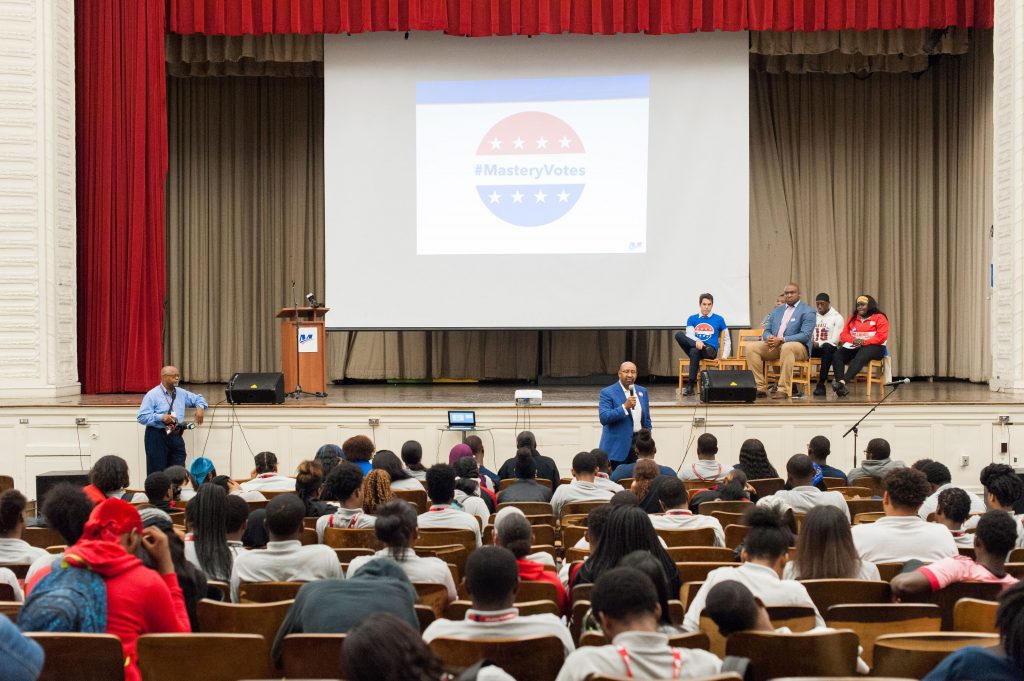 “Voting really does matter,” Nutter told the students. “Who you elect as mayor, city council members and state legislators has a direct bearing on your education. And voting certainly affects who’s in the White House.”

His appearance was part of a campaign called Mastery Votes. The goal is to register 100 percent of eligible Mastery students. Students from two other Mastery high schools, Thomas and Lenfest Campuses, also attended the event.

Nutter talked about the nation’s history of disenfranchisement to underscore what an important right voting is.

“There are people who came before us who fought and were beaten, some who even died, so that all of us could have the right to vote,” the former mayor said.

Students asked Nutter several questions after his remarks. When asked what he felt were his greatest accomplishments as mayor, he pointed out that his biggest accomplishments were also his greatest disappointments. He noted that the murder rate dropped 32 percent during his time in office while the high school graduation rate climbed from 57 percent to 68 percent. In both cases, he said he wished he could have achieved even better results.

The Mastery Votes campaign is also an effort to engage families. Mastery parent Shereda Cromwell asked students to promise to help their parents, grandparents and other adults register and to go to the polls together.

Following the event, students got the opportunity to see the new voting machines that will roll out in November. The city commissioner’s office brought in the machine and gave demonstrations to show students how they work.

Mastery Charter Schools is a nonprofit organization that does not endorse any candidate or political party.

Mastery Charter Schools and Mastery Schools of Camden form a network of 24 schools in Philadelphia and Camden serving more than 14,000 students in grades K-12 in Philadelphia and Camden. Our mission is to ensure all students learn the academic and personal skills they need to be truly prepared for postsecondary success and able to pursue their dreams. Read more at masterycharter.org.