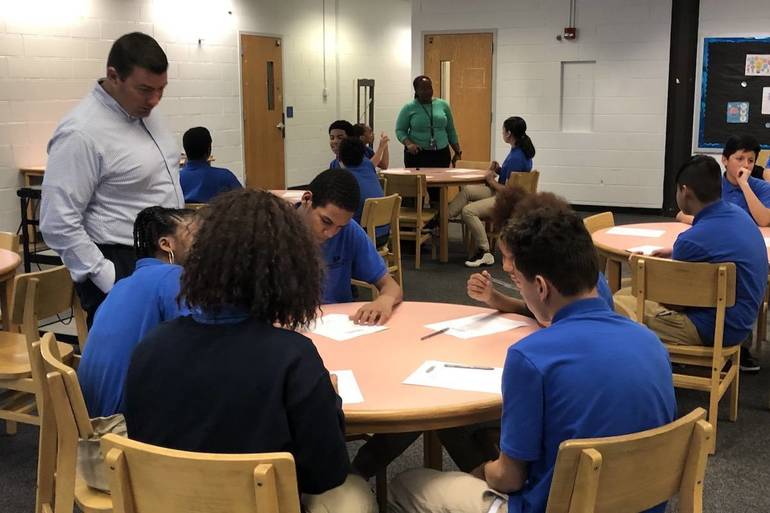 Tap Into Camden
by George Woolston -

CAMDEN, NJ—Eighth graders at Mastery East Camden Middle School are poised to get first-hand knowledge on how the area’s largest bridges have been built and maintained.

The six-week pilot program is aimed to get the middle schoolers interested in pursuing careers in transportation, bridges, engineering and safety industry.

Students in the program will participate in hands-on STEAM-focused activities lead by DRPA professionals in various fields, such as building solar-powered cars and model bridges. In addition to the hands-on experience, students will gain knowledge of various careers in the transportation industry.

The DRPA owns and operates the Benjamin Franklin Bridge, the Walt Whitman Bridge, the Commodore Barry Bridge, the Betsy Ross Bridge and the PATCO High Speedline.

“The DRPA owns and operates some of the biggest and iconic structures in the region,,” said DRPA Chief Engineer Michael Venuto. “It’s a good opportunity for us to work with local students who see these facilities all the time, and introduce some engineering concepts and get them interested in the STEAM fields.”

Mastery East Camden Middle School Principal Meaghann Lawson said that the program will help students contextualize how math and science are used in the real world.

“Its something we have not done in the past,” Lawson said. “We’ve done heavy doses of reading, heavy doses of math, but not necessarily contextualizing why we are doing those things, how does this actually matter for your life, how can you leverage as you grow and go out into the world.”

The program will take place in the school’s soon to be Makerspace, a space where students will technology, textile and power tools to build and invent solutions to real world problems. Lawson hopes the program, in addition to the Makerspace, lays the groundwork for an eventual STEAM academy at the school.

“We need to encourage the next generation of engineers,” Venuto said. “Throughout the country, our infrastructure is not getting any younger. We need that next generation to utilize new technologies and advancements to continue to improve upon and build new structures.”

Over the course of the six weeks, the students will learn about engineering, what careers can be pursued in engineering, and what kind of education is needed to become and engineer. They will also build a solar car and a bridge out of K’NEX that will be judged on its appearance and strength.