College hoops is next for Philly’s Jaylah Robinson, fulfilling a promise to her late sister whose time was cut short - Mastery Charter School 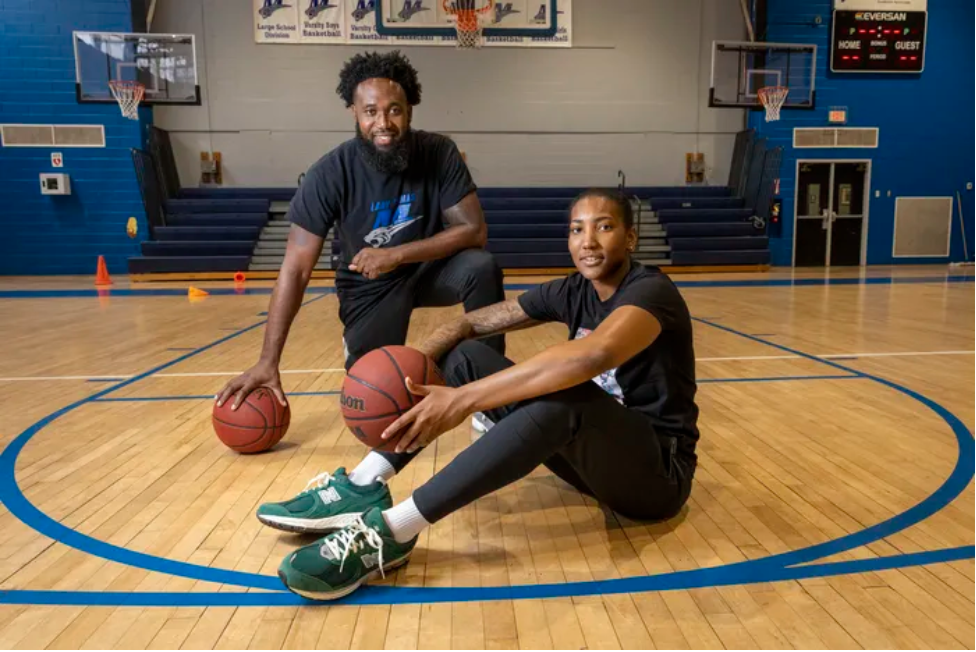 College hoops is next for Philly’s Jaylah Robinson, fulfilling a promise to her late sister whose time was cut short

Jaylah Robinson and her older sister, Jasmine Lewis, bonded best on the court. The two would meet up with friends at the Salvation Army Kroc Center a 15-minute drive from their East Oak Lane home, playing two-on-two basketball, while laughing and talking smack to each other.

“The whole game I would play against her,” Robinson said. “It was fun, though, like we were laughing and joking. That was a fun time that I’ll always remember.”

After a basketball session at the Kroc Center on Aug. 27, 2020, their mother, Karen Robinson, received a call that Lewis had been shot. Frantic, the Robinsons went straight to the hospital and sat there, waiting to see if she would wake up.

Lewis was struck by a stray bullet while driving in the 6000 block of Wister Street in Germantown and died three days later. She was 20 years old. Her murder remains unsolved.

Since Lewis’ death, gun violence has continued to escalate in the city, with 2021 being the deadliest year on record with 562 homicides, most by guns.

“I never seen anything like this; I never seen it this bad,” said Karen Robinson, who’s lived in Philly for 15 years. “I’m just so scared, and I don’t know what they could do to stop it. I really don’t have words.”

Lewis was going to attend Queens College in New York after transferring at the end of her sophomore season from Lackawanna College. She had a dream of joining the WNBA or playing basketball overseas.

Jaylah Robinson, who was 16 at the time, didn’t know how to handle the grief of losing her best friend. She wanted to stay strong for her mother and not show too much emotion.

Basketball became a coping mechanism for Robinson. It was a way of escaping the tears and memories that filled her household.

Now, the 18-year-old Mastery Charter School Pickett graduate is heading to Arizona State to play college basketball. It wasn’t easy getting there. But the adversity she overcame shaped her dedication to the game. The point guard is determined to stick to her promise.

“When the season came up, even preseason, I came to work every day,” Robinson said. “I was just determined. I wanted to play basketball, so I would show up every day and it took my mind off it. … I feel like I knew that’s what I wanted to do and that just made me keep going.”

» READ MORE: Her ticket up was basketball. But that was before a stray bullet took her life.

‘I was always better’

Robinson’s first introduction to basketball came when her sister brought her to Sturgis Playground, at 65th Avenue and 2nd Street in East Oak Lane, where they played with the neighborhood boys. Lewis always emphasized to her little sister to be aggressive.

She started playing competitively in fifth grade at First Philadelphia Preparatory Charter School. Robinson caught the attention of coaches who said she had a natural talent.

Robinson transferred to Mastery Charter Pickett in Germantown in the eighth grade and played for the middle school team. She then met Brandon Millwood, who just landed the head coaching job for the girls’ high school varsity basketball team.

“When I first got the job, the AD was like, ‘The middle school team is really good. There’s some really good incoming freshmen,’” Millwood said. “Seeing them play, I knew that Jaylah was one of the ones that I wanted to keep.”

Millwood knew Robinson was being approached by other high schools, including rivals like Imhotep Charter, to come play for them. He told Robinson that he trusted her enough to put the ball in her hands as a freshman on varsity. But he reminded her that being a quality point guard was going to be a growing process, since there were girls bigger and more experienced than her.

“The biggest thing was just her poise,” Millwood said. “A lot of younger players, middle schoolers coming into high school, they tend to get nervous, and even if they are skilled, the confidence isn’t always there. She was always mild-mannered, but her confidence never wavered, especially as a point guard.”

During the preseason of Robinson’s freshman year, Lewis, a recent high school graduate at the time, would drop Robinson off at the gym for practice. Most days, Lewis asked Millwood if she could join in the drills.

Millwood noticed how Lewis would berate Robinson if she messed up, but also was her biggest protector, standing up to anyone who tried to scuffle with Robinson.

Although they had a tight-knit relationship, their playing styles separated them on the court. Lewis, a forward, would throw elbows, and Robinson would make jump shots, trying to avoid the physicality of the game.

“I was always better, so she learned stuff from me,” Robinson said, cracking a smile. “I feel like she was always bigger and stronger than me, so she would always try to bully me. But I was faster. I do feel like I learned a lot. I toughened up; she always makes me cry, makes me stronger, and keeps me going no matter who I’m playing against.”

Following Lewis’ death, Robinson stepped away from basketball for about three weeks. Once she came back to the gym, Robinson told Millwood that she was ready to play with a new demeanor.

“There were definitely times where I’m like, ‘Is this what I want to do?’” Robinson said. “Being that I had been through all that, I took a little time off. When I came back playing basketball, I felt it really took my mind off it.”

Robinson wanted to play college ball. However, the 5-foot-11 playmaker knew she had more developing to do. She turned to Millwood, asking for guidance.

He told her that there was nothing on a basketball court that could be worse than what she had gone through, so becoming the player she aspired to be would be easy. From that point, Millwood picked up Robinson at 6 a.m. and went to the gym for practice.

“You can see the change, you can see the growth,” Millwood said. “I feel like, unfortunately, a traumatizing situation that she went through kind of helped expedite that process and help her grow up a lot faster.”

Millwood had connections with WNBA and college players, including Neumann Goretti graduates Kamiah Smalls and Diamond Johnson. He arranged for them to train alongside Robinson.

Her hard work paid off when Pickett won the girls’ Public League championship against Imhotep during Robinson’s sophomore season.

Robinson, who was named the Public League’s player of the year, received the game’s MVP. She finished with 12 points and three assists.

“It was just a good feeling,” Robinson said. “Everybody was saying the rival school was going to beat us, and we came out on top, so I feel like just to prove everybody wrong, it was a good feeling.”

Robinson had offers from James Madison, Delaware, and Stony Brook at the end of her junior year. That summer, she was committed to her training and ready to leave a mark in her final season.

One day she was working out with Millwood, Johnson, and Smalls, wrapping up the last play of practice. Robinson went for a step-back jump shot. Her knee planted awkwardly on the landing, and everyone immediately knew something was wrong.

Robinson was in pain and crying. Millwood drove her to the hospital. Doctors determined that she had torn her anterior cruciate ligament, forcing her to sit out the season.

“It was hard,” Robinson said. “The whole knee surgery, I couldn’t walk, so I was relying on my mom, my nephew, my brother for me. … I was able to walk on crutches straight into the gym; we were still practicing, I still came around. I was still learning. I just wasn’t physically on the court.”

The injury came with a mental adjustment, on top of wondering whether colleges were going to take away their offers.

When the season came around, she found other ways to offer support, like being an extra set of eyes for Millwood in games and practice.

Robinson committed to Delaware in November of her senior year, but when Natasha Adair, the Blue Hens’ coach at the time, took the same job at Arizona State, Robinson reconsidered her decision because of their close connection. She committed to the Sun Devils in June.

“I went down, and I didn’t play my senior year,” Adair said of her own high school career. “But it didn’t stop my path, so it’s just knowing the person before, and trusting that her work ethic to get back and obviously rehab. But we already talked about all of that. It’s more about who she is as a person.”

Adair believes Robinson will fit right into the program’s system, pointing out Robinson’s ability to shoot and attack the ball off the dribble.

“I can’t wait for our conference and the country to see her,” Adair said. “She is going to be an integral part of what we’re going to do. Not just because of her talent, but who she is as a person. She’ll give the shirt off her back to anyone.”

According to controller.phila.gov, more than 1,400 people have been shot this year in Philadelphia, 308 of them fatally.

Karen is afraid every time Jaylah leaves the house because she doesn’t believe the city is safe.

Robinson said each time she steps on the court, her sister is there with her. She also expressed some of the emotions tied to losing Lewis through tattoos in memory of her.

“I think that’s her way of showing how much she misses her sister,” Karen Robinson said. “I try not to cry. I’m taking it very bad.

“I go to the cemetery every day after work, and I sit down and just talk to Jasmine. I would go plant flowers. Jaylah and I were having lunch up there, and sometimes she goes by herself. It’s been an emotional roller coaster.”

While it’s a day-by-day process, Robinson hopes to be successful enough to make it to the WNBA or play overseas, carrying out the dream that her sister didn’t get the chance to achieve.

“She’s fought through it all,” Millwood said. “The sky is only the limit — like I tell people all the time, she hasn’t even reached her peak. She’s nowhere near her ceiling right now.”