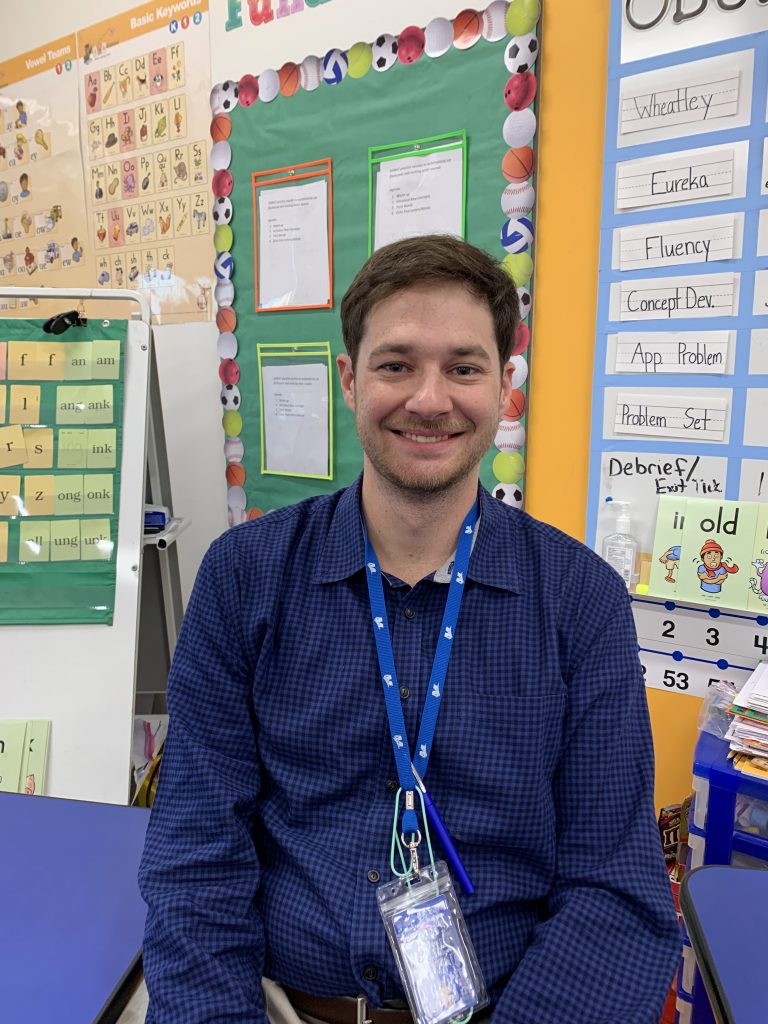 The best teachers will say that being an educator isn’t just a career; it’s a special calling and one that requires passion, dedication and a deep desire to make an impact in the world. That statement is at the heart of why Mastery Charter Schools’ Cramer Hill Lower second grade teacher Marc Spivak loves his job so much.

“I had two teachers when I was younger who didn’t give up on me,” Spivak said. “I struggled in reading when I was in the third grade. I know now that it was a learning disability and my teacher just wouldn’t let me cave in. She worked with me every chance she got and when I pulled through I later understood how important it was that someone didn’t give up on me. My second favorite teacher was my tenth grade history teacher, Mr. Hessler. It was my favorite subject because he made learning fun. Those are two elements I try to bring to my style of teaching.”

Spivak is in his fourth year with Mastery, having come to Cramer Hill Lower in Camden from the Cherry Hill school district, where he was a long-term substitute teacher. He attended Rider University, where he majored in elementary education and minored in history. He would like to eventually transition into being a school principal. In his off hours and on the weekends he spends time with his family, attends Philadelphia Eagles games or plays one of the sports – he plays all sports he said – he enjoys.

“I actually became interested in teaching as a tennis coach,” Spivak said. “I come from a family of athletes; I was a Division One player and I taught tennis to kids four to 18. But it was working with the younger kids that I really enjoyed and when I was in college I realized I was meant for elementary education. I knew it was a good fit. When I was growing up, I wanted to be just like my father; I wanted to do everything he does. When I told him I wanted to be a teacher, he was totally supportive of my decision.

Spivak could have gone anywhere to work in education but said he specifically chose Mastery Charter Schools because he wanted to work with the children who came from disadvantaged environments.

“I was a long-term substitute teacher working in Cherry Hill. But I wanted to work as a teacher full-time. My mother had a friend who knew the former principal of North Camden and I applied,” he said. “I heard back from them at a time when I really wasn’t expecting it. I took a tour of the school and immediately knew ‘This is where I want to be. This is where I can make a difference.” I’ve been here for four years and this is where I want to stay. These are the kids who need people who won’t give up on them and will help them become successful adults.”

According to Spivak, being a staff member with Mastery Charter is like being part of an extended family. People are ready to pitch in and help one another; they stand with each other and hold each other up. When asked how Mastery Charter has changed in the four years he has been with Cramer Hill, he said it’s much more flexible.

“It was always great. The leadership staff is committed to everyone being successful here. They’re always supportive of what we do but I think it’s more flexible now and that’s one of the reasons why people stay.”

It was during his first year at Cramer Hill that Spivak was confronted with a major issue that eventually validated his commitment to education.

“I was maybe two months in,” he said. “I saw one of my students, a little girl, and she was crying. I took her aside and asked her what was wrong. ‘My dad is throwing nails at my mom. I don’t feel safe at home.’ I was stunned. I had no idea of what to do. We got DCPP involved (Division of Child Protection and Permanency) and they intervened. In a perfect world I wouldn’t have had to see that. But we don’t live in a perfect world, do we? That student is in the fifth grade now and she still comes by to my class to visit. She helps with the younger children. Is being a teacher challenging sometimes? Yes, but seeing students like that one overcome the problems at home, and having her come back and tell me I made a difference, that makes what we do so rewarding.”