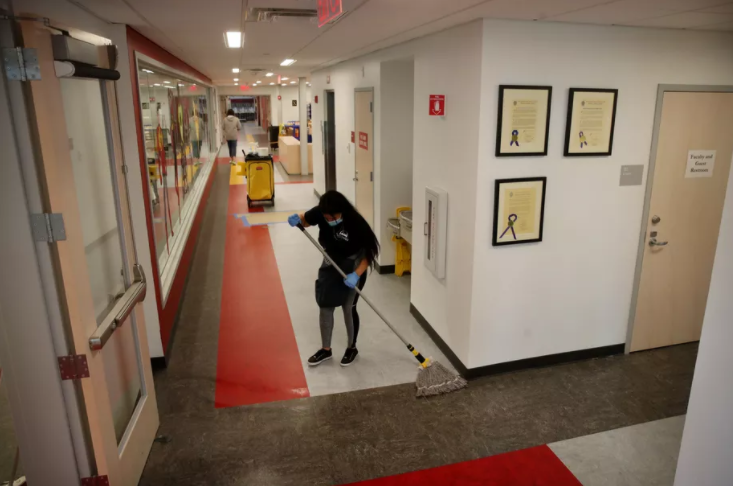 That decision, Success CEO Eva Moskowitz says, had nothing to do with President Trump. It also wasn’t prompted by teachers union pressure, since New York City’s largest charter network isn’t unionized. What did matter: Uncertainty about whether future outbreaks would prompt more closures, facilities issues, the safety concerns of parents and staff, and the Success’ confidence in its remote-learning setup.

“The best way for us to protect teaching and learning was to stay remote and have a level of predictability,” said Moskowitz.

Big city school districts across the U.S. have been slower to reopen buildings than their suburban and rural counterparts, though more are now open on a hybrid schedule. Those decisions mean students of color in particular have gone longer without the academic, nutritional, and emotional benefits of in-person school.

Critics have pointed to teachers unions and anti-Trump sentiment as contributing factors, especially in places where COVID case rates remain low. But the decisions being made by the country’s biggest city charter school networks — operating in the same areas but typically independent of unions and district regulations — suggest there’s more going on, and highlight the complicated ways politics have shaped school reopening choices.

Like the districts they compete with for students, many charter schools started the year remotely and have since reopened slowly, if at all. Some have been more aggressive than their local districts and others have been more conservative, but many have tracked those districts closely.

Charter leaders say they’re responding to many of the same pressures facing districts, including the safety concerns of parents and staff, many of whom are Black and Latino, and the daunting challenge of teaching students during a pandemic no matter which path they choose.

“My mantra now is, what’s the least bad decision,” said Richard Buery, the president of Achievement First, a charter network in three states.

The vast majority of city school districts, as well as those serving largely students of color, began this school year virtually.

Chalkbeat’s review of some of the largest charter schools in those cities found a similar trend. Among them were Success Academy and Achievement First in New York City; Alliance College-Ready charters, the largest network in Los Angeles; Chicago’s three largest charter networks; all but two of the more than two dozen regional school networks at KIPP, which together serve 100,000 students; Mastery, the largest charter operator in Philadelphia; and the public schools in New Orleans, which is a nearly all-charter district.

Some charters did reopen in person to start the year due to state mandates. And now, amid early signs that reopening school buildings have been largely successful from a health perspective, more urban districts and charter schools are bringing at least some students back in person. New Orleans, for instance, began welcoming students in grades 5 through 12 back to school this week for the first time since March.

A majority of families at Alliance charters said they were “very concerned” about having students return. For Achievement First, just a fifth of high school parents and a third of elementary school parents in New York wanted their child to attend school in person, according to an August survey. At Chicago’s Noble Network of Charter Schools, only a third of the staff and parents said that they were comfortable returning to school buildings in early June.

“It was really clear that a very large percentage [of parents] was very nervous about going in,” said Moskowitz.

Charter leaders say staff concerns were an important part of their calculus too — even when there isn’t a union to represent those interests. Henderson Lewis, the superintendent of New Orleans’ nearly all-charter district, said that in response to staff concerns, he pledged to only reopen buildings if the local test positivity rate was below 5%, rather than the 10% threshold the state of Louisiana adopted. “It’s not just the safety of the students — it’s the safety of our teachers and our students,” he said.

Some charter networks also purposefully coordinated with local school districts. In Texas, for example, officials with the IDEA charter school network attended regional planning meetings with other school superintendents. In Louisiana, IDEA followed the lead of the schools in East Baton Rouge Parish.

“It’s in our best interest to collaborate with everyone and present a united front,” said JoAnn Gama, the CEO and superintendent of IDEA, which serves some 66,000 students.

In some places, that coordination could mean charters’ decisions have been indirectly influenced by local teachers unions.

State and local experiences with COVID also shaped some charters’ approach. Achievement First has begun reopening its schools in Rhode Island and Connecticut, but not New York City.

“Rhode Island as a whole was just more oriented toward opening quickly,” Buery said. But in New York City, he said, families have been particularly reticent about reopening after the city’s high death toll from the pandemic in the spring.

Meanwhile, the lack of enthusiasm among many parents for reopening in person brought into sharp relief the major challenges and costs of doing so.

“We were going to spend many hours a day managing the health risks — with, by the way, the possibility of closing,” said Moskowitz, who pointed to New York City’s recent closure of over 100 district schools in neighborhoods where infection rates have spiked.

An extended period of remote instruction allowed many charter schools to focus their energy on just one mode of teaching, rather than trying to conquer the staffing, health, and pedagogical challenges of doing in-person and virtual instruction at once. Some charter leaders say the quality of their online teaching assuaged concerns about missing in-person schooling.

“This is obviously a work in progress for everybody … but we’ve also felt that our remote learning has been strong,” Buery said. “That just means we can continue to be incredibly deliberate about when we’re reopening physical buildings.”

Decisions to keep buildings closed have also given parents stability that many want.

The Mastery charter network, which serves 14,000 students in Philadelphia and Camden, New Jersey, for example, made the call to start virtually in part to give families more time to coordinate child care and work schedules. Officials there worried a hybrid model would mean last-minute changes if health conditions or local policies shifted — which could be even more “disastrous” for working parents.

“We needed to choose one path and really lean in hard,” said Scott Gordon, Mastery’s CEO. The loudest parent feedback was: “I need to know what you’re doing … so I can plan.”

“That plays less than zero a part in how we think about whether to reopen or not,” Buery said.

“It was at best a footnote — it didn’t shift, guide, or inform any of the approaches that we were taking,” said Rudy Elizondo, an instructional superintendent at Alliance charter schools in Los Angeles, which will remain remote through the end of the semester.

Lewis of New Orleans said schools made the call to start the school year virtually in mid-July, soon after Trump pushed for schools to reopen. But the decision had everything to do with rising COVID cases in the city, he said.

“We were looking at what was best for our community,” said Lewis, and the decision was “absolutely not” about Trump.

That doesn’t mean politics played no role. In some cases, the federal push may have helped shape parent opinion, and in other cases, charter networks had to adhere to state and local guidance, which may have been influenced by Trump. Several analyses have linked an area’s school reopening choice to its political leanings, rather than its COVID caseload.

Matt Niksch, the president of Chicago’s Noble charter network, noticed a dip in the share of staff and families who wanted to come back into school buildings between June and July. It’s hard to know what caused it — the drop coincided with both a rise in coronavirus cases across the country and Trump’s push to reopen schools. But Niksch thinks “some of it was probably related to the federal government pushing it without any regard for what the cases on the ground were.”

Jennifer Brown, who heads KIPP Jacksonville, says her schools likely would have opted for a hybrid model had it not been for Florida’s order to offer five days a week of in-person instruction, which applied to charters. It was issued in early July, shortly before the White House launched its full-scale push to reopen schools. Florida Gov. Ron DeSantis is a Trump ally, and federal officials have praised the state’s approach. (The order was challenged, but has so far prevailed in court.)

Brown says her schools prepared for several scenarios, but when the “marching orders” came down, they got to work. “I know from being in the Army sometimes we have feelings about it,” she said, but you “salute and drive on.”

Though the percentage of families who feel comfortable with in-person learning has ticked up, many parents have still been reluctant to have their children return. About half of students continue to learn from home, said Brown, a reticence tied partly to the fact that many of her students, 98% of whom are Black, live in multi-generational households, where a sick person could infect older relatives.

“They know that disproportionately Black families are impacted negatively by COVID-19,” Brown said. “That’s what they’ve continued to express: It’s just pure fear. When people say they’re scared, this is legitimate.” She continues to survey families weekly to look for ways the schools could address their concerns, in addition to holding town halls.

Right now, every IDEA region is offering in-person learning, though only about 20% of all students are going into school buildings.

On the other side, Democrat-led California has limited school reopening in counties where virus counts are relatively high.

Another policy factor shaping planning: money. Negotiations over additional federal money for schools have stalled in Congress, after an initial package of relief fell far short of what many estimates said schools needed.

“It requires resources,” Buery said. “The limitation of those resources limits our ability to do the physical things that we need to open schools safely.”

Charter leaders say their plans are continuously evolving. Some are planning to stay remote until at least January, while others are beginning to reopen their campuses, sometimes ahead of the local district.

KIPP’s Memphis schools, for example, are planning to bring back younger students and students with special education plans later this month, while the district remains remote. Meanwhile, KIPP’s Miami schools began phasing in students on a hybrid plan last week, just as the Miami-Dade schools started welcoming students back for in-person instruction, too.

At Mastery, 11% of students are going into school buildings for extra support, many of whom are students with disabilities or students who’ve struggled with remote learning. Lessons from that early effort will help inform what the charter network does next, and officials hope they’ll be able to bring more students back this winter.

Noble officials have already announced they will remain remote through late January, but haven’t made a call yet about next semester.

Niksch says they’ll be watching to see what Chicago’s traditional public schools do — if they go back fully in-person, he knows there would be more pressure for Noble to do so, too — and whether staff and family sentiment changes, while keeping an eye on changing public health conditions.

“Everyone in the country is now prognosticating,” he said, “about what’s the course of this virus.”