As the Philly School District struggles to reopen, some city charters have brought kids back. But they haven’t rushed it. - Mastery Charter School 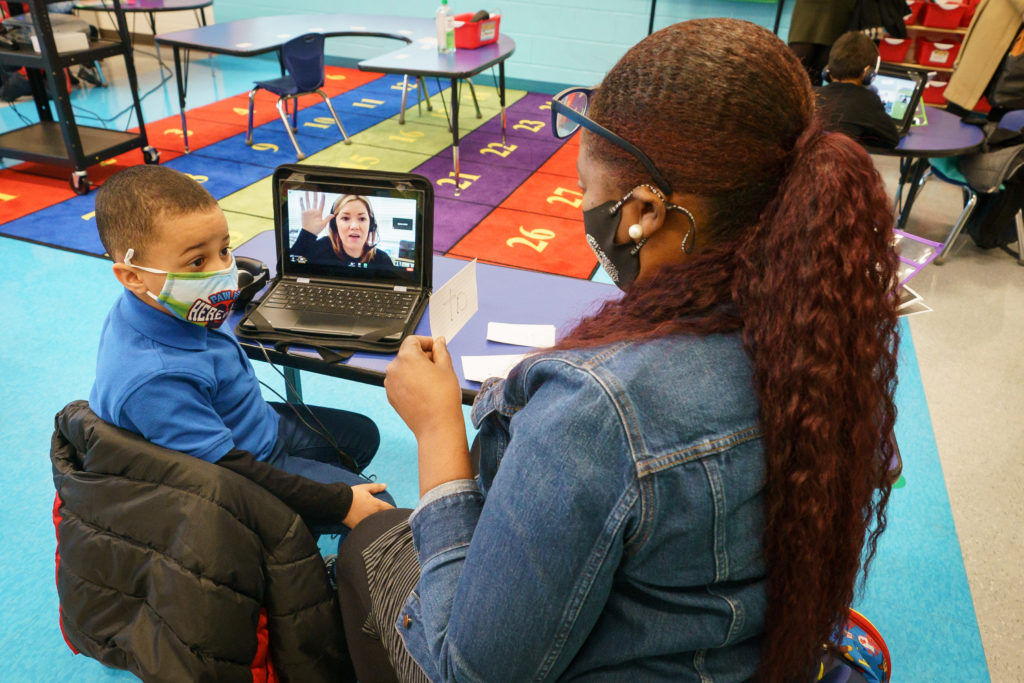 As the Philly School District struggles to reopen, some city charters have brought kids back. But they haven’t rushed it.

The role of teachers’ unions has loomed large in the charged national debate over reopening, but Philadelphia’s charters demonstrate there isn’t a lone factor dictating who’s back in classrooms.

Eight fourth graders took deep breaths in through their masks inside Belmont Charter Elementary on Thursday morning, as an announcement over the loudspeakers guided them: “Breathe, relax, and get your head ready.”

As the exercise came to a close, teacher Jacqueline Pochadt instructed students in the West Philadelphia school to rise from their desks — marked off with tape and spaced six feet apart — and grab their laptops for a math lesson.

Though the children were quiet, Pochadt was struck by their presence in the classroom, something neither she nor they had experienced in nearly a year. Of course, they had spent time together during months of virtual learning, but some barely spoke up when logging on from home.

“I didn’t even know,” she said, “what their voices sounded like.”

While the Philadelphia School District’s reopening plan has stalled amid a dispute with its teachers’ union over building safety, some city charters — which enroll about one-third of Philadelphia’s 200,000 public school students — have already brought students back to the classroom. The Belmont Charter Network, which runs several West Philadelphia schools, brought its youngest students back four days a week earlier this month and has since phased in the higher grades. Sixth to eighth graders are due to arrive this week.

Mastery Schools, which operates the largest charter network in Philadelphia, will be opening its schools there for K-2 students on Monday, while KIPP and MaST schools will also resume in-person instruction.

For years the existence and growth of charters across the city has been a controversial topic among educators and parents. Some charter leaders acknowledge the sensitive positions their teachers may be in when their buildings reopen and the wider district does not.

Unlike the School District, the city’s charters are largely nonunionized. Yet while the role of teachers’ unions has loomed large in the charged national debate over reopening schools, Philadelphia’s charters demonstrate there isn’t a lone factor dictating who’s back in classrooms and who isn’t.

Some charters have returned to in-person learning. Others have not — and have no timetable to do so. Some charter leaders said their small size made it easier for them to reopen — unlike the district, with its stable of old buildings, persistent financial limitations, and a history of mistrust among staff and parents that only intensified with recent problems over building conditions and unchecked environmental hazards.

But that smaller scale can present its own challenges. With 60 staff members, “if we had an infection and had to quarantine four staff members, we may not be able to adequately function,” said Larry Jones, CEO of Richard Allen Preparatory Charter School in Southwest Philadelphia, which is teaching some special-needs students in person but has not yet planned a broader reopening for its more than 450 students.

In some cases, charter leaders say they found a significant number of parents hesitant about sending their children back — or tolerant of virtual learning while the virus remains prevalent.

“We did not get that parental pressure to open. Some schools have people screaming outside, yelling — we just didn’t get it,” said Claudia Lyles, CEO of Keystone Academy Charter School in Tacony, which has about 700 students and has not set a date to resume classroom instruction.

Many students came to the charter from traditional public schools where safety was already an issue for some families, Lyles said. “In this pandemic, I hear the same sentiment: ‘I want my children to be safe.’”

Opinions on reopening schools diverge along racial and socio-economic lines, polling shows. A Pew Research Center survey released last week found that 80% of Black, 69% of Hispanic, and 72% of Asian adults said schools should wait to reopen until all teachers who want the coronavirus vaccine have received it. Just 51% of white adults felt the same way.

And 67% of lower-income adults said schools should wait, compared with 57% of middle-income and 52% of high-income adults.

Philadelphia teachers this month began getting vaccines through the Children’s Hospital of Philadelphia — a factor that may shift reopening calculations, said David Hardy, founder and interim CEO of Boys’ Latin Charter School in West Philadelphia.

Hardy’s school has about 800 students but has not yet set a reopening date. He said some teachers have been worried about returning without vaccines — concerns he understands, particularly “without clear medical directives from government.” But he also said that the School District’s dispute with its union carries weight with the city’s charters, even though they aren’t governed by the same labor agreements.

“You can’t have something that’s way out of kilter from what they do,” Hardy said. “There’s a lot of us that probably could have brought kids back” already and convinced parents in the process, he said, but “the labor deal … would have been hard. That’s just a hard reality.”

To ready its 24 schools in Philadelphia and Camden — many of which are in district-owned buildings — Mastery Schools spent more than $3 million on ventilation, including installing plasma air filters. It also committed $2.5 million for weekly COVID testing for staff and students; and $500,000 on personal protective equipment, said CEO Scott Gordon. He said federal grants covered the costs, as well as savings the network realized from not operating in person this year.

Just under half of Mastery’s elementary students have opted to return in person. Though the charter network is facing some staffing issues — 15%-20% of its staff have requested work-from-home accommodations, Gordon said — he expects to fill those gaps in part by tapping teachers to cover for colleagues.

Other unorthodox arrangements were on display Wednesday at Mastery Cramer Hill Elementary in Camden, which welcomed K-2 students back a week earlier. In one classroom, kindergartners wore headphones and watched a lesson on their laptops.

Their teacher wasn’t at home, but in a separate room across the hallway — so that she didn’t have to wear a mask, allowing students to see her lips during reading instruction. Another group of kindergartners participated in the lesson from home, joining their classmates in the virtual room.

A second teacher walked through the room and sat down next to a boy covering his mouth with a Paw Patrol mask. “I want to go over your sight words,” the teacher, Kimberly Clark, said, pulling out a small stack of index cards.

“At,” she corrected him, focusing on the first letter: “A, apple, ah.”

Clark, a literacy support teacher, said she had been vaccinated and was comfortable being with students. Even though the return to school is far from normal, young children especially “need to have that world,” she said, gesturing at the laminated alphabet and word posters on the classroom walls. “This is where they’re getting exposed to everything.”

Shawnae Wynn, a parent at the school, called the decision “very hard” but ultimately sent her son Elijah, a kindergartner, back to Cramer Hill in person. “I wanted him to be around other kids, to show the teacher how smart he is, how awesome he is,” she said.

She said she had some apprehensions, but staff walked her through the school and explained precautions, such as how often students would wash their hands. “That made me feel safe,” she said.

At Belmont, which reopened to third through fifth graders this week, CEO Jennifer Faustman said the charter network built trust within its community by sending out weekly reports outlining case numbers. Surveys ultimately found 60% of parents favored returning their children to the classroom — compared with just one-third of eligible families who chose that option in the broader citywide school district.

“We reassured them we were following the science,” Faustman said as she entered the elementary Thursday, passing tables where staff checked that students had answered COVID-19 screening questions before entering the building.

Like some other city charters, Belmont Elementary occupies a district-owned building. The school doesn’t have mechanical ventilation; a number of rooms featured window fans — similar to the airflow fix proposed in other buildings that drew outrage from district teachers.

Faustman said the fans were in line with Centers for Disease Control and Prevention recommendations and noted that they were just one of the measures employed by the charter, which will also offer weekly COVID testing to staff and students.

While it had pushed back earlier reopening dates due to case rates, Faustman felt the momentum had now shifted.

“Once you get open,” she said, “seeing is believing, in some ways.”