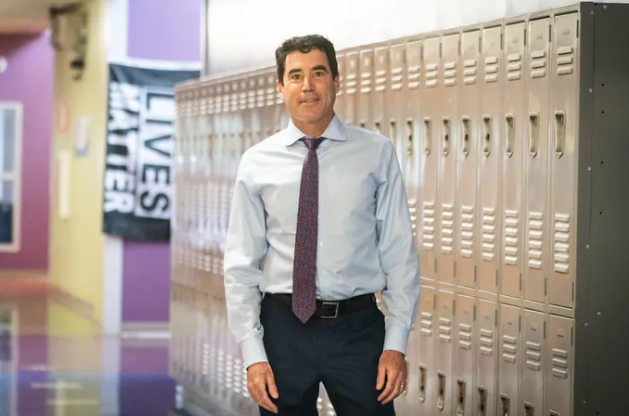 The Philadelphia Inquirer
by Kristen A. Graham

Scott Gordon, founder and chief executive of the sprawling 22-year-old Mastery Charter network, will leave the system at the end of the 2022-23 school year.

Gordon’s decision to step down comes as the organization prepares to engage in a new strategic planning process. It’s someone else’s turn to help shape what comes next, he said.

“I’ve been thinking about sustainability of Mastery and our ongoing work and evolution,” Gordon said. “I’m not burnt out, I’m not tired. I just had a milestone birthday and I wanted to try out something else before I retire.”

Founded as High Tech High, a single charter school, in 2000, Mastery was born because of Gordon’s work as a consultant on a Greater Philadelphia First project, which underscored the demand for more skilled workers in the region. Gordon’s goal was audacious: to transform high school.

The system now encompasses 24 schools and 14,500 K-12 students in Philadelphia and Camden, including both standalone charters and traditional public schools given to the company to turn around and manage. Along the way, Mastery has earned significant national funding and attention from Oprah Winfrey and former President Barack Obama.

At first, Mastery emphasized innovation and pushing the boundaries of what public schools could be. But turnarounds inspired Mastery, and Gordon, to fulfill additional roles, serving not just the kids whose parents sought out and signed up their children for Mastery, but for every child who walked in the door because it was their neighborhood school.

“It really pushed us to think about what a great school is for all kids — for kids who are medically fragile, kids who have severe emotional issues, as well as kids who are going to go on to Harvard and Howard,” Gordon said. “That really has been the work that we have been obsessed with and relentlessly focused on for the last 15 years — trying to reimagine what a great public school can be.”

The work of neighborhood schools “is just really challenging,” Gordon said. “You need to be exceptionally strong at lots of different things. It’s required as an organization, we are really nimble and have lots of talent and don’t lose the entrepreneurial spirit to take on new things.”

And the work is evolving, even two decades in, Gordon said. The network got its name from a concept it embraced in its early days: Students could not move forward until they achieved mastery of a concept, scoring a 76% or higher. It emphasized internships for all at one point. And for a time, it was a “no excuses” network with a strong focus on discipline, but it distanced itself from that model, embracing more supports.

Mastery is now moving back toward mastery-based learning, tweaking its high school design to shore up paths to postsecondary work, whether for college-bound students or those who enter the workforce.

Doing the work for 20 years means Gordon has seen generations of students. So what was his best moment?

“The first time one of our graduates became a Mastery teacher,” Gordon said. “It was so awesome. My heart was going to burst.”

Forty alumni of the network now work inside Mastery schools, in jobs from administrators to climate staff.

The work has been political and controversial at times, with charter critics accusing Gordon and Mastery of doing their work at the expense of traditional public schools. (Charters are publicly funded but privately managed, and authorized by local school boards.)

For a time, the relationship with the Philadelphia School District felt like a collaboration, particularly when outside turnarounds were in vogue; other times, the climate has felt more adversarial.

“The winds are blowing more that way than they used to,” Gordon said. “I’m sure they will blow back again. Our work in Camden is still very much a partnership with the school district. We used to share practices back and forth [with Philadelphia]. That’s not the culture right now.”

Though politicians and policymakers debate charter-vs.-traditional-public school questions, that doesn’t connect much with Gordon’s on-the-ground experience with parents and students, he said.

“Parents want a great school for their kids. Whether it’s a charter or a district is not what’s driving them and it’s not what’s most important,” Gordon said. “They want the school that’s going to do right by the most precious thing in the world to them, their child. The slings and arrows is part of our world, but it has not knocked the organization or me off of the work.”

Gordon said he’s proud of the work Mastery has done around building a teacher pipeline, investing in teacher residencies, and emphasizing recruiting Black and brown teachers. Mastery has also built a strong parent network and is known for its ability to organize families. Recently, parents spearheaded a rally at City Hall to call attention to crossing guard, police, and 911 operator vacancies, for instance.

Mastery’s work has been both “soul-satisfying” and incredibly difficult, Gordon said. And his long-ago goal, of transforming schools? It’s a work in progress, still.

The city’s current gun violence crisis has been the single most challenging problem of the last 20 years “by a long shot,” he said. (The network invested $500,000 in evidence-based support and interventions for the most at-risk students to deal with the violence and trauma they experience.) On the academic side, Gordon said, more work must be done around adjusting the high school model so Mastery students interested in trades can get hands-on experience, and there’s still debate over the best way to teach reading.

“Schools are not designed based on the world our kids today face,” said Gordon. “Catching up and figuring out how to meet every kid where they’re at and prepare them for the world as it is — that’s kept me busy for 20 years.”

What’s next? Gordon has overseen development of cereal for General Foods and he founded a worker-owned home health company in Philadelphia. But he’s an education guy now.

“I’m really interested in what happens to our kids after they graduate,” said Gordon. The vision isn’t 100% clear, but he thinks his next move will be “how to make sure students who attend schools like ours safely transition to family-sustaining careers.”

Sulaiman Rahman, CEO of DiverseForce and a Mastery board member, said Gordon has led the network to set a “standard for success” in Philadelphia and Camden.

“Mastery’s commitment to serving children and families from underserved communities starts with the leadership of Scott Gordon,” Rahman said in a statement.

Mastery will immediately begin a search for Gordon’s successor, and he vowed to work closely with his replacement to ensure a smooth transition.