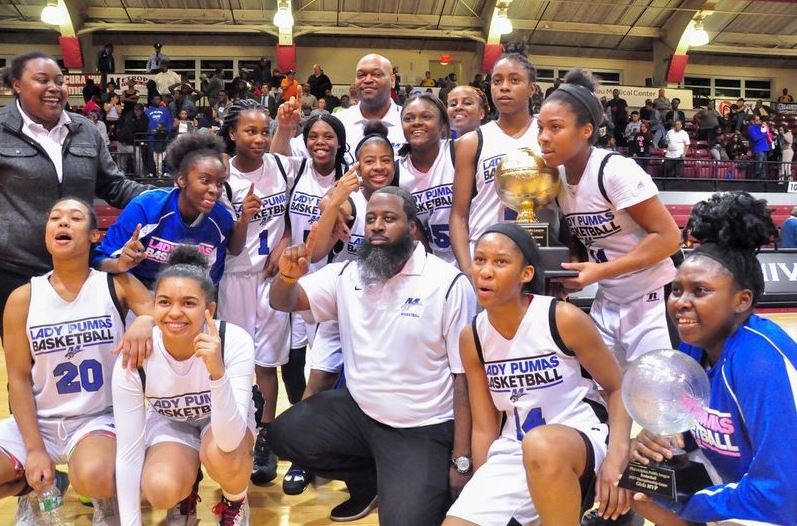 When Imhotep Charter won the Public League championship two years ago, Daron Russell was the starting point guard. Russell won the Most Valuable Player award for that contest.

Well, he was standing in the winner’s circle again when Imhotep Charter defeated Martin Luther King, 53-49 in overtime Thursday at Saint Joseph’s Hagan Arena. Russell scored a game-high 24 points picking up another league crown and a second MVP.

“It feels great,” Russell said. “It kind of gets crazy when you know the game gets tight, but we had to work keep each other mentally focused on the object at hand and get the job done.

“I was struggling from the field. I was missing a lot of open shots and a lot of contested shots too that went in and out, and rimmed out. I had to work my way to the free throw line making free throws and was able to get the job done.”

Imhotep Charter head coach Andre Noble has coached a number of great players over the years. However, Noble has been fortunate to coach Russell throughout his high school career.

“He’s been special,” Noble said. “He’s played three years here. He’s the all-time leading scorer. He’s going to score over 1,600 points in his career. He leads us in assists and steals. He’s a 3.0 student and a better person. So, we’re going to really miss him.”

Russell will play his college basketball at the University of Rhode Island next year. The Panthers will have him for a few more games. Imhotep Charter will face Conwell-Egan in the Class 4A playoff game on March 4 at Philadelphia University. The tipoff will be at 2 p.m.

“It’s the best thing right now,” Byers said. “My coach [Damien Abrams] told me to come out and play aggressive and don’t give up. That’s what I did.”

Mastery Charter North had lost to Imhotep Charter in the finals the last two years. This season they were able to hold on and grab the league title. In addition to Byers, Devia Terry had nine points, 18 rebounds, four blocks and four assists. Abrams was very pleased with the effort of all his players.

Mastery Charter North will play Archbishop Wood on March 3 at Father Judge in a Class 5A playoff game. The contest will begin at 6 p.m.